25 per cent increase in sales at annual trade show 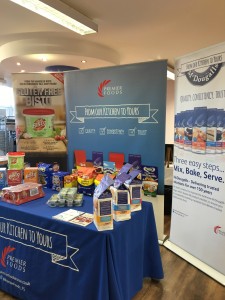 The Newton Abbot-based firm, which runs the biggest foodservice event in the West Country, concluded deals worth more than £600,000 at the event at Newton Abbot Racecourse.

More than 700 foodservice professionals, including leading independent food manufacturers from across Devon, Cornwall, Bristol and Somerset, and some of the UK’s leading suppliers, attended the show, which smashed the £500,000 sales mark set in 2015.

The trade show, which was free to visit, featured 250 exhibitors displaying their new and best selling products, as well as offering one-off deals to attendees on the day.

Sales director Giles Thomas said: “I think the key to success was in the support provided by our suppliers.

“There was a fantastic mix of suppliers taking part – from big household names to fabulous locally based suppliers.

“We’ve a brilliant range of food producers and manufacturers across the West Country, and it’s wonderful to showcase their products at our event.

“The show was a huge hit, and we’re looking forward to making next year even bigger and better.”

Bodmin-based supplier Proper Cornish Food Company were among the exhibitors on the day and have already confirmed their place at the 2017 event.

One of the UK’s leading suppliers of traditional hand-made Cornish pasties, Proper Cornish unveiled new products, with its 6in chorizo sausage roll proving a hit with the attendees.

“The proof is in the pudding, and we recorded a high volume of sales, particularly with the new products including the chorizo sausage roll.

“We’ve already confirmed our place for next year and look forward to improving on this year’s fantastic sales achieved at the trade show.”

Launched in 1999, the wholesaler supplies businesses and organisations across the West Country, including Somerset County Cricket Club and Exeter Chiefs rugby club.

M.J. Baker Foodservice is a member of Fairway Foodservice, a buying group made up of 17 independent wholesalers from across the UK, Ireland, Jersey, Spanish Costas and Balearic Islands.