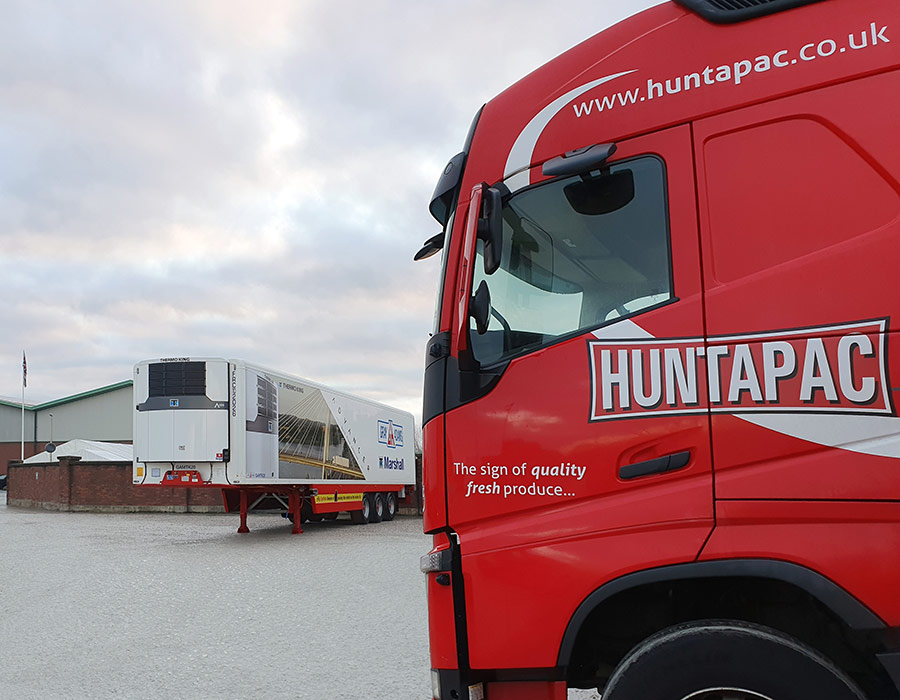 Improved efficiencies, increased sustainability and, most of all, proven fuel economy are the key drivers behind Huntapac Produce Ltd taking five new additional G&A refrigerated trailers that have been fitted with Thermo King’s brand-new Advancer A400 refrigeration systems for the first time.

Commenting on now specifying Thermo King systems in their trailer fleet, Joanne Cleece, head of transport at Huntapac Produce Ltd said, “Across the whole spectrum of our tractor unit and trailer fleet, we are looking to increase the overall fleet fuel efficiency going forward, specifically to offset the continually rising costs of fuel. We were keen to try the Advancer system as soon as it was launched to see whether TK’s Advancer fuel cost claims were justified.”

Joanne continues, “Working closely with both TIP and Marshall Fleet Solutions, we were the first company to run the MFS Advancer demonstration trailer in the UK. Within the trial period, based on our running profile of 1500 hours per annum, the fuel savings were exceptional, in comparison to our existing reefer trailers fitted with the equivalent incumbent systems. In addition, the Advancer performance stats also indicated a substantial environmental benefit too with significant savings in CO² output per unit.  Instantly we realised that Advancer was going to be a game changer, not just for our future refrigerated trailer fleet but for the industry in general.”

In early 2021, Huntapac were looking to increase their trailer fleet to cope with the additional customer volumes and added a further five new Gray & Adams single temperature refrigerated trailers, with each one specified with an Advancer A400 system. These new trailers are now based at the company’s West Lancashire production facility and were supplied on a contract hire deal through TIP Trailer Services, with Marshall Fleet Solutions handling the Advancer refrigeration system service and maintenance support during the trailer’s working life.

“For many years now our trailer fleet has been wholly based on non-Thermo King systems. This recent switch over to Thermo King Advancer systems is a big change for the company however it has been based on strict operational performance out on the road. The MFS Advancer demonstration trailer was put straight into our fleet literally as soon as it arrived and was working during our busiest trading time, running full loads of carrots and other root vegetables, and with no special preferential treatment,” said Joanne Cleece.

Joanne adds, “The results spoke for themselves. MFS were able to give us full and accurate detailed performance data during the trial period, as well as identifying the significant fuel, environmental and operational cost savings that were achieved.”

Huntapac is a fourth-generation family run company first established in 1942, and they specialise in the growing, packing and distribution of a variety of root vegetables, brassicas, salads and organic vegetables. Based in Tarleton, West Lancashire, Huntapac currently run a fleet of 66 tractor units, 66 refrigerated trailers, of which 20 are dual temperature and 40 are single temperature, and 40 bulk trailers.

“One of the most challenging elements of running a transport fleet is the cost of fuel which impacts on every operator. As part of its programme to increase its fleets’ overall fuel efficiency, Huntapac worked closely with MFS to see whether Advancer could play a significant future role in their refrigerated trailer fleet. Advancer soon proved itself out on the road and we are really pleased to now be actively involved with Huntapac as part of this ongoing fleet efficiency initiative,” said Mark Howell, managing director, Marshall Fleet Solutions.

Further information about the full range of Thermo King Advancer transport refrigeration systems from Marshall Fleet Solutions can be viewed on the MFS website at www.marshallfleetsolutions.co.uk