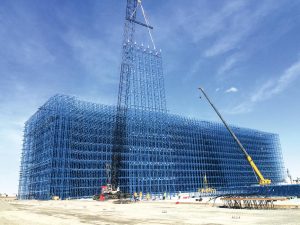 WAGNER has provided an active fire prevention solution for the world’s largest high-bay freezer warehouse in Richland, WA, USA. With doing so, WAGNER stride a new path as it is the first building in the US being protected by an OxyReduct® active fire prevention system. Conventional sprinkler technology, which is still the norm in the US, would have been pushed to their limits with the company’s impressive figures: three protected areas with a total volume of over 1.05 million m3, 35-meter-high shelving systems and 117,000 pallet storage spaces. Commissioned in July of 2015, the warehouse stores and unloads around ±900,000 tons of frozen food per year – primarily French-fries – with an order volume of over US $100 million. OxyReduct® was therefore selected as the fire protection solution with the system being active by suppressing fire before it chance to become established, in an environment that sprinkler systems and firefighters would be ineffective.

The active fire prevention system installed in Preferred Freezer Services’ freezer facility is a system utilising the latest Pressure Swing Adsorption (PSA) technology specially adapted to the site’s structural conditions. The system’s principle is based on lowering the air’s oxygen concentration in the warehouse through controlled introduction of nitrogen. The correct level of oxygen was determined on the basis of fire tests considering ignition thresholds of the stored goods packaged in dispatch-ready cartons as well as the negative temperatures (-23° C/-10° F) in the warehouse. The results of fire tests were approved by the independent German authority VdS (Organization of Property Insurers).