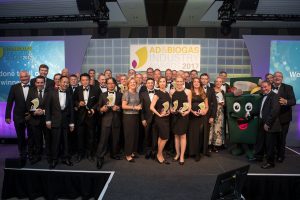 Hugh Vaughan, who was UK Director at pump and mixer manufacturer Landia, tragically passed away earlier this year with his wife in a road accident whilst on holiday in Mauritius. Hugh had been at Landia UK since its formation in 1994 and had been one of the founder directors of the Anaerobic Digestion & Bioresources Association (ADBA), which jointly organised the awards dinner with the World Biogas Association (WBA).

Hugh was posthumously awarded a special ‘Contribution to the UK AD Industry’ award at the ceremony.

ADBA Chief Executive paid tribute to Hugh at the ceremony:

“Hugh leaves behind a legacy that we must all work hard to continue to fight for. Hugh remained one of ADBA’s most passionate advocates and left us a mission: to continue to grow the UK and global AD industry, and this is how we can best honour his memory.”

This year’s awards also had a strong international focus, reflecting global growth in the AD industry through the new World Biogas Expo running alongside UK AD & Biogas. Winners for international awards came from around the world, including as far as Australia and Japan.

Charlotte Morton said of the awards:

“These awards were a great opportunity to celebrate the best and brightest in the AD industry both in the UK and around the world, and helps ensure that everyone knows the huge contribution this industry can make to meeting the UN Sustainable Development Goals.”

“Privilege Finance prides itself on supporting the UK AD industry and we were delighted to be the Gold Sponsor of this year’s AD & Biogas Industry awards.

“The awards evening was a great success, and it was fantastic to see so many individuals and businesses celebrated for their achievements over the past year.

“Having already invested over £250 million in AD projects in the UK, we look forward to continuing to work with ADBA, and those in the wider industry to make AD a viable and successful diversification option for farmers, landowners, food manufacturers and food waste processors across the UK.”