The UK’s food waste recycling industry has written to the government’s newly appointed Food Waste Champion urging him not to overlook the importance of recycling inedible food waste through anaerobic digestion (AD).

Philanthropist Ben Elliott was appointed the government’s first Food Surplus and Waste Champion at the end of 2018 to help drive forward Defra’s plans to cut food waste and support redistribution of edible food waste following the publication of the Resources & Waste Strategy in December. 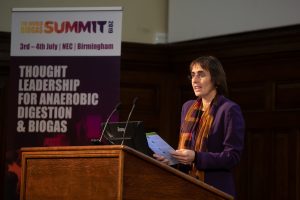 Charlotte Morton, Chief Executive of the Anaerobic Digestion & Bioresources Association (ADBA), has written to Mr Elliott this week congratulating him on his appointment and urging him not to neglect food waste that cannot be avoided and that is not suitable for redistribution to people or animals. Six million tonnes of food waste are currently sent to incineration or landfill, causing emissions of climate-change-inducing methane and the loss of the energy and nutrients locked up in food waste.

In her letter, Ms Morton highlighted the need for universal separate food waste collections to allow inedible food waste to be separated from black-bag waste and recycled through AD into renewable energy and natural fertiliser. She also pointed out that the introduction of food waste collections is also associated with a reduction in food waste levels as householders and businesses become more aware of the amount of food they are throwing away.

Only around a third of households in England currently have access to food waste collections. ADBA estimates that universal collections for households alone could achieve a carbon saving of up to 1.5 million tonnes of CO2-equivalent per year, the equivalent to taking three quarters of a million cars off the road, and lead to the production of an additional 187 MW electrical-equivalent of electricity capacity, enough to power all the homes in a city the size of Glasgow.

The Resources & Waste Strategy outlines an ambition for universal food waste collections across the UK by 2023, with Defra due to consult on its plans for achieving the goal.

“The appointment of a Food Waste Champion is vital to ensuring the goals of the Resources & Waste Strategy are met, and it’s absolutely right that this new role will prioritise prevention and redistribution of edible food waste in line with the Food Waste Hierarchy.

“It’s essential, however, that the need for separate food waste collections to recycle food waste that can’t be prevented or redistributed is not forgotten. The government’s own findings identify AD as the best treatment option for inedible food waste, allowing this waste to be recycled into renewable energy and soil-restoring natural fertiliser.

“It’s also important to point out the critical role of food waste collections in reducing food waste, through making householders and businesses more aware of the amount of food they are throwing away.”