BIG (and little) NIGHTS IN ARE HERE TO STAY

BIG (and little) NIGHTS IN ARE HERE TO STAY

Research carried out by Mars Ice Cream has revealed that the trend for entertaining at home is here to stay.  66% of UK consumers say they now entertain at home as much as, or more than they did ten years ago. 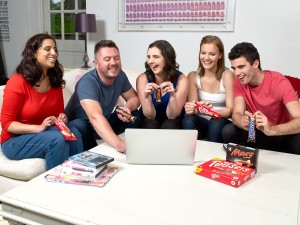 Twenty percent plan to host weekly gatherings at home over the next six months with 68% planning to home entertain at least once a month.  The most prolific home entertainers are the 18-24 age group with one in three planning to host a meal every week for friends or family.

When it comes to the choice of dining out or eating in with friends and family a third (35%) say that they would rather entertain at home, and a further 27% prefer to be invited to a friend or family member’s house, rather than going out.

An overwhelming majority, three quarters, of those surveyed (71%), cited the relaxed atmosphere as the main advantage of socialising at home, while 37% felt it was easier than going out, and a further 34% relished not having to dress up – with 48% saying that it was not a financial decision.

And this is where ice cream comes into its own for all social gatherings.  80% of consumers associated ice cream with fun, with 74% saying that it reminded them of good times in the past.

While some traditionalists still expect a homemade dessert, nearly two in three people (58%) stated that they would consider offering an  ice cream bar or ice cream on a stick as a dessert choice – rising to 73% for those aged 18-34.

When selecting pre-made desserts, hosts are looking for quality (63%), price (38%) and being easy to serve (37%). A further third (30%) also looking for pack size and convenience.

When selecting ice cream from the freezer aisle, two thirds of shoppers (65%) look for great quality, followed by recognised brands (25%) and a family favourite (23%).

Bep Dhaliwal, trade communications manager for Mars Ice Cream says, “It’s great to see that ice cream continues to prove its place as a firm favourite for a fantastic night in!  Enjoyed by all ages, it’s proven itself as a staple for dessert to enjoy in the comfort of your own home – whether you’re entertaining friends or family – in the garden, or in the lounge!

“We would urge retailers to display Mars Ice Cream’s range, face forward to capitalise on the home entertaining trend for recognised brands and family favourites.”

Impromptu gatherings also figure highly on consumers’ minds with two in three 18-34 year olds stating that they have some ‘social entertaining’ staples in the freezer.

Ice cream is second on the list of items people would look to buy to entertain at home.