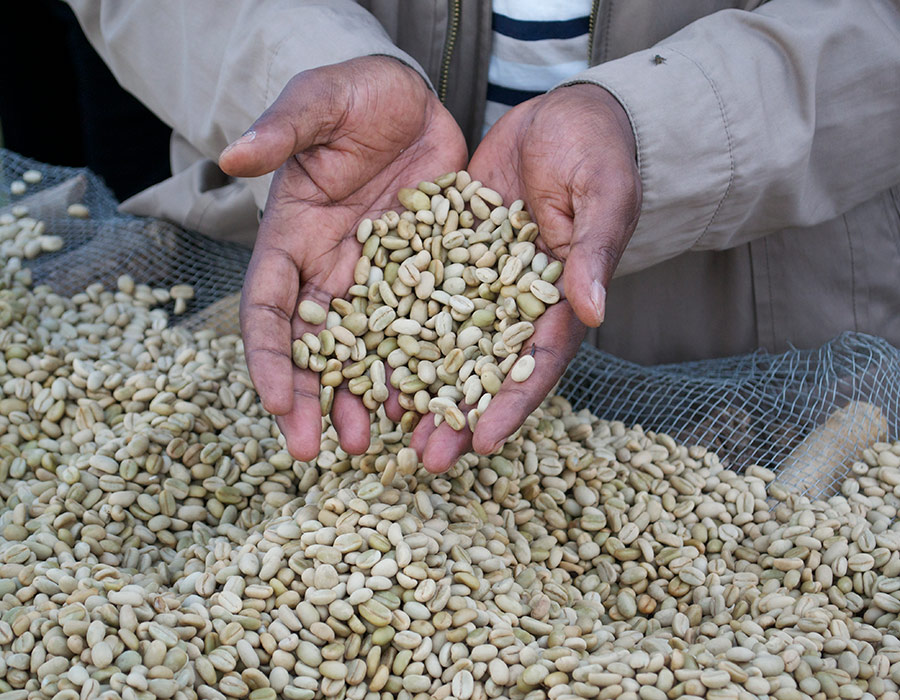 As a newly established coffee originating business committed to combating deforestation, Tanzania-based Kijani Hai has been going from strength to strength. With the Bühler DA MultiVision optical sorter installed at the heart of its new export line, the company has recorded a 20% increase in its annual savings thanks to less physical loss of coffee.

Established in the early 1970s, the CTCS Group is an independent, multi-discipline service provider and partner to suppliers and manufacturers in the coffee, peanut and edible seeds industries worldwide. Headquartered in the UK, the family-owned Group has offices in Africa, Europe, the United States and Australia. The Group holds three subsidiaries, one of which is CTCS Green Coffee. In 2019, CTCS Green Coffee set up an originating business in Tanzania, a country renowned for its high-quality coffee.

The co-operative, known as Kijani Hai, procures, processes and exports green Arabica coffee from the Ilela Coffee Plateau – an area, approximately 50 km from the Mbinga region that has been used for coffee farming for the last four decades. The company has 21 staff, four field operations around Tanzania and 9.000 farmers. It exported more than 2.800 tons of coffee in 2020 but is expecting to achieve 5.000 MT within the next two seasons.

Kijani Hai holds Organic and Rainforest Alliance certifications (RFA). Companies certified under the Rainforest Alliance Certification Programs are trained to implement agricultural practices that help reduce the impact of one of the biggest issues faced by the coffee industry: deforestation. With forecasts predicting a sharp, ongoing rise in coffee consumption, it is likely that this will drive even more deforestation if no precautionary measures are taken, thereby exacerbating the effects of climate change, and threatening the future of coffee production.

The name Kijani Hai originates from a Swahili phrase which translates into English as “Living Green.” “As a coffee grower, your environment is your business – that’s not up for debate. We like to think of ourselves as eco warriors in suits,” says Alexander Wield, Coffee Trader at the CTCS Group.

Deforestation in Tanzania is due to a number of factors including agricultural practices and increased demand for fuelwood and timber supply. “The amount of trees being cut down at such an alarmingly high rate in Tanzania heavily impacts the environment which in turn affects our farmers and their livelihoods,” Wield states.

One of the best natural defences against climate change is forests, due to their ability to store large quantities of carbon dioxide. “To counter the deforestation, last year we planted 23.000 avocado, macadamia and coffee trees in Mbinga,” Wield mentions. “We also set up a bee keeping course in Iringa for our farmers; four out of ten of the hives have populated so far. This will serve as another source of income from the same plot of land. It’s all about ensuring diversity of income for our farmers because when the farmer is protected, the environment is protected: the two go hand in hand. That is how we maintain our green export, by taking care of our farmers.”

Kijani Hai is also committed to improving women’s role in coffee processing. “We work with Lupembe Mamas – part of our Kibanga co-operative – where we promote the women’s coffee separately to develop a premium for their coffee,” Wield adds.

In line with Kijani Hai’s aim to mitigate the effects of deforestation, Bühler maintains a commitment to boost climate protection with its ongoing roll-out of innovative, energy-efficient solutions. The company’s goal to reduce the waste, water consumption and energy used in its customers’ food production by 50% hugely appealed to the coffee co-op when seeking out a technological partner.

“In the past my team and I have operated both the SORTEX A and B and they work well withstanding the tests of volume and time, so Bühler was already on my radar. For this operation however, we needed something suited to a lower output. As most of my team was already familiar with Bühler’s software and the technology, it seemed the most logical decision to look into their more cost- effective optical sorters with a lower carbon footprint that would suit a smaller operation,” Wield states.

In May 2019, the Kijani Hai team installed a Bühler DA MultiVision optical sorter in its export line after the gravity table separation. The sorter features a high-resolution RGB color camera which enables Kijani Hai to detect up to five color defects in one sorting pass, minimizing the need for product re-sorting. The DA MultiVision has allowed Kijani Hai greater control of its operations. “With the color sorter we can process much faster and more efficiently,” Wield says.

Indeed, he shares the company’s notable cost savings as a result of using the optical sorter. “Without the optical sorter, we would expect a physical loss of 0.2% of the coffee (approximately 15.000 USD), but with the sorter, the losses are much closer to 0.0% meaning significantly less coffee wastage.

“Our processing data also shows that the cost of hand-picking is 1.4 USD per 60 kg bags or 23 USD/MT. The marginal cost of machine processing in comparison, is just 0.29 USD per 60 kg bag or 4.8 USD/MT. On the 2.500 MT that we processed this year, the saving has been around 45.500 USD – excluding building and depreciation costs.”

Thanks to its investment in the latest technologies such as the DA MultiVision, Kijani Hai is now able to export its coffee to Germany, Holland, Italy, UK, Australia, New Zealand, Japan, Korea, Taiwan, China, US, South Africa and North Africa.

“Looking ahead, we hope to expand internally within Tanzania and externally as we’re always looking to bring Tanzanian coffee to new customers. CTCS will be maintaining its focus on East Africa and Central America – we eagerly anticipate whatever the future holds and will continue in our ongoing battle against deforestation and climate change,” Wield concludes.

HAVE YOUR SAY - HOW WOULD A 5-7 DAY NATIONAL POWER OUTAGE AFFECT YOUR BUSINESS?