The Nottingham company joined the likes of big brands Mars and Premier Foods to take part in the project carried out by the Food and Drink Federation (FDF) and the National Skills Academy for Food and Drink.

The food and drink sector has a strong record on productivity growth, outstripping overall UK productivity and many global competitors. But food and drink manufacturing is facing skills gaps in key technical and scientific areas, and an ageing workforce, with 130,000 new employees needed by 2024.

Now food and drink business leaders, including Butt Foods managing director David Williams, have come together to take steps to ensure that productivity gains are sustained and they can recruit and retain the next generation of food engineers, scientists and leaders.

They have pinpointed a number of priorities, including increasing the quantity and quality of apprenticeships, improving engagement with schools and the collaboration between the sector and higher and further education, and showcasing the exciting career opportunities on offer in the industry. 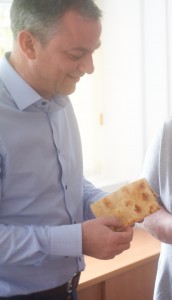 Butt Foods managing director David Williams said: “The food and drink sector is a stimulating and interesting sector to work in, and, as a company, Butt Foods was honoured to play a role in this project which is helping to ensure that productivity in the industry is boosted. I have worked over the last six months with FDF president Dame Fiona Kendrick and the panel representing smaller companies and identifying what is holding them back from being more productive.

“I worked alongside organisations like Nestlé, Mars, Premier Foods, Mondelez and apetito to share our experiences of improving efficiency through cultural changes and suggested ways in which the skills gap could be plugged.

Butt Foods is based at Lenton Industrial Estate, Nottingham, and supplies a range of naans, flatbreads, sub rolls and other speciality breads to the food service sector. The firm, which recently celebrated its 25th year in business, increased its turnover from £1.6m in 2012 to £4.5m last year, as well as doubling its staff during the same period to about 65 people.

As a result of the collaboration, the Food and Drink Federation has released a report, Unlocking Talent –  The Key to Driving Food and Drink Productivity, and has developed a three to five-year plan for business-led action to deliver a real step change in skills and talent within the UK food and drink manufacturing sector.

FDF will work in partnership with Government, the National Skills Academy for Food and Drink, the National Centre for Universities and Business, the Careers and Enterprise Company and other partners to deliver the action plan with industry.