Specialist baker Butt Foods has launched a new naan bread that’s lighter and more bubbly than ever before in response to trends for premium and new wave Indian food dining experiences.

The Baked Earth artisan sourdough recipe naan benefits from a live cultured sourdough with a long fermentation process to improve flavour and texture – creating a naan bread that’s bubbly, soft and suitable for a range of meal applications throughout the day. 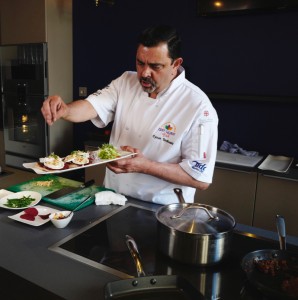 The company commissioned celebrity chef and former BBC Food Personality of the Year Cyrus Todiwala OBE to develop a range of uses for the artisan sourdough recipe naans to illustrate the flexibility of the flat breads. He has created a selection of serving suggestions for the naans that show the real versatility of the product which go far beyond the traditional side-of-plate application and which highlight just how many options chefs have to be creative with this new concept in naan breads.

“Naan is brilliant – it’s such a versatile bread. Just use your imagination and the world lies at your feet,” said Cyrus, who has a broad portfolio of restaurants, running Café Spice Namaste, Mr Todiwala’s Kitchen at Heathrow T5, Assado London and The Park Café.

Available in 6 inch and 4 inch sizes, the new naans are perfect for restaurants, hotels, bars and other food service operators, such as street food vendors, that are committed to serving up top quality naan breads, as well as the growing number of new wave contemporary Indian eateries that are offering dining options from breakfast through to evening.

As a result of its special composition, the Baked Earth artisan sourdough recipe naans can be topped, filled, folded and wrapped, and the serving suggestions created by Cyrus include hand-held ‘sliders’, pizza-style topped naans, foldovers and wraps, and cover meal occasions including breakfast and brunch, snacks and main meals.

Videos of the dishes created by Cyrus and filmed in the development kitchen of his Café Spice Namaste restaurant in London are available to watch for free on the Butt Foods website in Chef’s Corner.

Butt Foods has been baking naan breads for more than 25 years, having introduced authentic frozen naan to the foodservice market in 1991. Its latest naan is a light and bubbly Indian bread baked with yoghurt, with toasted kalonji and cumin seeds adding a nutty flavour, made from the company’s unique recipe.

It has been developed in response to its research into the changing UK Indian restaurant scene, which shows the increase in exciting new wave eateries that offer various degrees of all-day dining, depending on location, with menus to suit.

“New Indian food is moving away from traditional curries into a world of new flavours, snacks and small plates, different presentation and extended meal occasions. We’re very pleased to be launching our Baked Earth artisan sourdough recipe naans, which are really something very special and which have been created to provide restaurants and other eateries with a tasty naan bread that’s both versatile and flexible,” said managing director of Nottingham-based Butt Foods David Williams.

“Our market research has shown a new wave of Indian restaurants bringing exciting new flavours and formats, and we believe our range of Artisan sourdough recipe naans are perfect for these outlets which are providing an alternative experience for diners.

“We were delighted when, in independent research, our product outscored the leading foodservice competitor on taste and texture.”

The artisan sourdough recipe naan is made from a natural process that takes up to ten days from starter through to mother dough, mature dough and then final dough. No raising agents mean a more natural product and better flavour, with pure butter ghee adding colour and taste.

Cyrus, the 2014 BBC Food Personality of the Year, was born and brought up in Bombay. In his bastion Cafe Spice Namaste, Cyrus is known for his refined, elegantly spiced and sophisticated cooking. He has cooked for royalty, presidents and international celebrities and is often invited to be a guest chef at food festivals and hotels from Dubai to Durban, and all across the United Kingdom.

For more information about Butt Foods, to see its latest trend reports or the videos featuring menu ideas created by Cyrus, visit www.buttfoods.co.uk