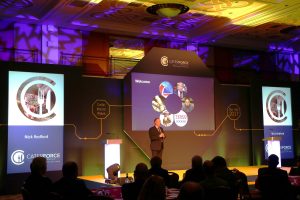 Speaking at the bi-annual Caterforce Supplier Conference, at Celtic Manor in Newport, South Wales (16 November 2017) Mr Redford, revealed the group had grown sales by 28% to £547m since 2015, and is on course to achieve £121 million of like-for-like sales growth in 2017 compared to two years ago. In addition, Caterforce is forecasting an additional £84 million increase in sales by the time of its next conference in 2019.

Mr Redford said, the record growth had been driven in a large part by massive investment in infrastructure by Caterforce members, combined with improved marketing and new product development.

Commenting on the results he said: “Caterforce is outperforming the foodservice market across all categories. This is particularly impressive given our historic strength in frozen, as we are now repeating this performance in ambient, fresh and chilled.”

Purchasing director Gary Mullineux added, “We have grown our customers by 9% and increased their spend with us by an average of 16%. We now have 7.7% of the foodservice market by value and a 15% market share in independent delivered foodservice. With such a strong performance, we believe the group has the potential to achieve sales of over £1 billion.”

The fourth Supplier Conference, was attended by a broad range of foodservice brands and representatives of the eight Caterforce member companies. They heard from a range of speakers from within the group, as well the Sunday Telegraph’s economic commentator Liam Halligan on opportunities in the post-Brexit economy and foodservice market analyst Gareth Nash of MCA Insight, who examined current trends in the foodservice sector. The afternoon was rounded off by keynote motivational speaker and Olympic athletics medallist, Kris Akabusi.

Commenting on the conference Stephen Hurley of Britvic Soft Drinks said: “This was an excellent and informative conference which not only highlighted the success of Caterforce, but captured the opportunities and challenges that the foodservice market will face in the next two years. I look forward to the 2019 event.”

Later in the day, the conference dinner and awards recognised the achievements of many of the Caterforce’s supplier partners.