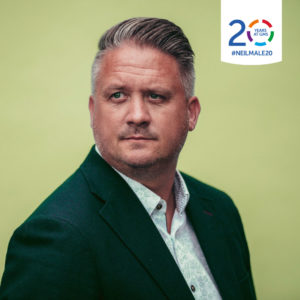 This week, the CEO of one of the UK’s leading security companies, GMS Group, is celebrating 20 years with GMS; 15 of which have been at the business’s helm.

Neil Male who once played professionally for Torquay United FC, first joined GMS in 2000 after a serious back injury forced him into retirement from football. Since being made a shareholder in 2005, Male has been instrumental in the growth and expansion of GMS Group, which now employs 500 people throughout the UK and turns over in excess of £14 million a year.

Established as a security manned guarding business in 1998, the GMS Group has grown and evolved to incorporate additional, complimentary services and is now solely owned by the Male family.

Reflecting on where it all began, Neil Male CEO at the GMS Group said, “In August 2005, Emma and I re-mortgaged our house and signed a personal guarantee for £250k to invest into the business (GMS). My business partner at the time John Goldsmith showed faith and instilled a self-belief in my ability, I initially thought, ‘what’s the worst that can happen?’ I looked at Jack, my son, who at the time was 12 months old, I knew what I had to do. Failure wasn’t an option, I had to make this opportunity work.”

Male continued, “My passion for GMS is as strong now as it was when we re-mortgaged our house; I am driven by good health, happiness and financial stability for my family and the team. I have built an incredible team to assist me to run GMS Group on a day to day and in return this has let me put some of my skills and time into other organisations.”

“I was recently appointed in December 2019 a board member of Kaleidoscope Plus Group, an emotional wellbeing charity who promote positive mental health as well as accepting an interim role with Kidderminster Harriers FC as CEO in October 2019, taking me back to my football routes. I never thought in a million years I would do anything outside of GMS Group, but it is testament to my co Directors that I can juggle these roles.”

The Group is set to turnover £15 million this year despite the current economic climate and is anticipating continued growth following the news last week that GMS Group is now working in partnership with leading facilities management firm, Arcus FM.

Speaking about the group’s expected growth and its new partnership, Male continued, “Manned Guarding will always be at the heart of what we do, but to sustain growth it’s important that we work to provide customers with a wider range of innovative services and add real value.”

“We have become established in the automotive, food and beverage, logistics and manufacturing sectors and will continue to focus on these areas. Our next goal is to achieve a £25m turnover by 2023.”

As GMS Group’s reputation has grown, so has Male’s. In recent years he’s been recognised as one of Grant Thornton’s Faces of a Vibrant Economy in 2018, shortlisted by the Institute of Directors for their Award for Innovation in 2018 and scooped the gong for Transformational Leader in the West Midlands Leadership Awards in 2019.

GMS Group have been leading the market in innovation, service and delivery since 1998 supporting clients such as Jaguar Land Rover, CEMEX UK, Kerry Foods, Aston Martin and AF Blakemore.