The search is underway to find the UK’s top young culinary trio after the launch of the highly prestigious Country Range Student Chef Challenge 2016/17, which is run in collaboration with the Craft Guild of Chefs.

Now in its 23rd year, the annual Country Range Student Chef Challenge has become the pinnacle for full-time hospitality and catering college students looking to showcase their culinary prowess and creativity, while developing “real life” catering skills and experience under intense pressure situations. 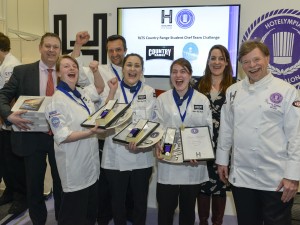 In an extremely on-trend theme for the 2016/17 challenge, each team of three students will be tasked with creating, preparing and cooking a three-course, three-cover menu around the theme ‘Healthy Gourmet Fine Dining’.   The menu must include:

Registration for the competition opens on the 1st September and chef lecturers from across England, Ireland, Scotland and Wales are invited to register their interest on www.countryrangestudentchef.co.uk to receive an entry pack.

Chef lecturers will be required to enter their team(s) by submitting a completed entry form, which includes details of their three-course, three-cover menu, the ingredients and methodology used for each course and the associated costs of each element, which must total a maximum of £8 per cover.  Deadline for registrations closes on the 28th November.

The menus will then be judged with the winning teams selected to compete in regional heats at the end of January 2017 before the successful teams make it through to the live final which will take place on the 15th March in the Live Theatre of ScotHot – Scotland’s biggest food, drink and hospitality show.  ScotHot runs from the 15-16th March at the SECC Glasgow and is also home to the 31st Scottish Culinary Championships.

In addition to taking home the much coveted title, the victorious team will also win the unique opportunity to work with the Guild’s culinary team in catering for over a thousand guests at the Craft Guild of Chefs Annual Awards 2017.

The Country Range Student Challenge 2015/16 winning team from Loughborough College – Daniella Bromley, Emily Bucknall and Rebecca Brooks – will be heading to Germany on a once in a lifetime work experience trip in October to compete alongside the Craft Guild of Chefs’ culinary team at the Culinary Olympics.

Darren Creed, lecturer and mentor of the first all-female winners in the competition’s history, commented on the benefits of the challenge to the students and colleges:

“It’s an incredible competition which provides so many benefits so I can’t recommend it enough for both students and colleges. The competition gave the girls a real insight into what they can do and helped provide them with the confidence and belief to keep developing and strive for the top. Winning the highly sought after award and the prize of going to the Culinary Olympics is fantastic for their CVs and we also received an incredible amount of press coverage for the college, both locally and nationally.”

“We are delighted to support this well-respected culinary competition and are honoured to champion the chefs of the future.  It is important that students are given the opportunity to showcase their skills within the industry. The Student Chef competition not only does this but throughout the course of the competition provides further support and development of their talent. We are excited to be working with the colleges, students and the Craft Guild of Chefs to build an even greater event in 2016/17.”