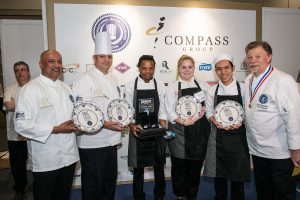 A trio of talented chefs from the City of Liverpool College came out on top in the thrilling conclusion in the Live Grand Final of the Country Range Student Chef Challenge 2019/2020, which is run in conjunction with the Craft Guild of Chefs and took place at the Hospitality, Restaurant and Catering Show (HRC) on March 3rd.

The three culinary students – Chi-Hin Cheung, Talent Sibindi and Beth Disley-Jones– were under the tutelage of lecturer Ian Jaundoo and wowed the judges with their inventive menu, impressive skills and techniques and ability to stay calm under the watchful eyes of the live audience.

The theme for the prestigious Country Range Student Chef Challenge 2019/20 focused on how students can use classic techniques and skills to maximise the use of ingredients, whilst also reducing food waste.

The City of Liverpool College students’ menu was first scrutinised by Craft Guild of Chefs Chairman of Judges Chris Basten in December in a strict paper judging stage before the students were then tasked with recreating it in a live semi-final heat at the City of Glasgow College on 6th February 2020.After advancing through to the Live Grand Final, the team then competed against nine other teams from colleges around the UK and Ireland.

The City of Liverpool College winning menu consisted of:

“We’re absolutely thrilled to have won and I don’t think it’s really sunk in yet. We weren’t expecting to win but I think it helped us in the end as it calmed the nerves and allowed us to focus on our tasks. Cooking in front of a live audience was daunting at first but as the final progressed, we all really embraced the support of the crowd and enjoyed the experience. It’s been a fantastic competition to be involved in and we’ve all learnt a lot. Whether that’s better time management, menu planning, teamwork or use of ingredients and flavours, we’ve all picked up skills along the way which will prepare us for a future career in the industry but winning is the cherry on top.”

“I’m absolutely delighted that the team has won a major culinary competition like the Country Range Student Chef Challenge. Although it’s our third team entering, the students are normally used to competing individually so to win as a team of three is a remarkable achievement and they should all be very proud. They’ve planned their menu from start to finish, making tweaks along the way after the semi-final heat in Glasgow following feedback from the judges, so to triumph in the final is just brilliant and a credit to them and their hard work. Obviously winning is great for their CV, future career prospects and the College’s culinary reputation, but they’ve also mastered new skills and techniques, and met other catering students and industry contacts along the way which will put them in good shape for the future.”

“A huge congratulations to the City of Liverpool College on winning the Country Range Student Chef Challenge 2019/20 title. Their menu showed fantastic creativity, flavours and taste, whilst also ticking every box on this year’s theme by maximising their ingredients and reducing their food waste while working. And perhaps the hardest part and their biggest achievement was that they managed to replicate it all under the watchful eyes of the judges when it mattered in the Live Grand Final. Well done to all the teams who competed in the final as all the menus showed great planning and execution.”

“It was a fantastic and fitting finale to the Country Range Student Chef Challenge 2019/20 and one which showed everyone that the future of the UK and Ireland’s culinary industry is in very safe hands. There have been comments in the media recently that a career in foodservice is unappealing and that people working in it are low skilled but I think the standard of skills shown by the students has dispelled any notion of that. For young student chefs to be able to plan, prepare and execute menus of that quality under competition conditions is phenomenal so hats off to all the teams who took part and a very special congratulations to this year’s winning students from the City of Liverpool College.”

In addition to competing for the Country Range Student Chef Challenge 2019/20 title, all the finalists were also marked by the Craft Guild of Chefs to international judging standards with Gold, Silver, Bronze and Merit certificates awarded. The full list of teams and awards was as follows:

The Country Range Student Chef Challenge is a prestigious culinary competition which has become a firm fixture in the catering industry’s calendar.

Run in partnership with the Craft Guild of Chefs, who provide competition-standard judging and detailed feedback to the students, it has played a huge role in developing young chefs and talent around the UK and Ireland, with previous winning teams being given the opportunity to compete at the Culinary Olympics and cook for the country’s leading chefs at the Craft Guild of Chefs Annual Awards.

Entries to the Challenge were accepted until December 18th 2019 before they went through to a strict paper judging stage. The successful entrants then competed in semi-final heats with ten teams progressing to the Grand Final at the Hotel, Restaurant & Catering Show (HRC) on March 3rd 2020.

The teams, consisting of three full-time catering and hospitality students, were required to plan, prepare and present a three-course, four-cover menu in just 90 minutes with a cost per cover of £8.

The Country Range Student Chef Challenge 2019/20 theme focused on how students can use classic techniques and skills to maximise the use of ingredients, whilst also reducing food waste. Their menus needed to include a:

Starter – A flat fish, filleted and a sauce made from the bones. The dish must be served with appropriate garnish and must include one turned mushroom per portion

Main – Three bone loin of pork, the eye of the meat must be used. The trim is to be used for a separate element e.g. faggot, kebab or pie. The dish must be served with appropriate garnish including starch, vegetable and sauce

Dessert – A lemon tart with a modern twist

About the Country Range Group

In addition to offering the leading brands from around the globe, the Group also provides over 800 products, all developed exclusively for professional caterers under the Country Range brand. Covering grocery, chilled, frozen and non-food, Country Range is widely recognised by caterers as a trusted and reliable brand delivering consistent quality and value for money without compromising on taste and flavour.