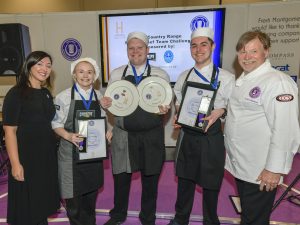 Following an enthralling final played under the watchful eye of a live exhibition audience at Hotelympia on Wednesday 7th March, City of Glasgow College fought off fierce competition from nine other colleges to scoop the prestigious Country Range Student Chef Challenge crown.

Under the tutelage of lecturer Robbie Phillips, the winning team, which consists of Erin Sweeney, Jordan McKenzie and Lee Christie, came out on top in a highly-competitive final.

“We still can’t quite believe that we’ve won but we’re completely and utterly over the moon. While it’s been incredibly tough, it’s literally been the best experience of my life.”

“A huge congratulations to the City of Glasgow College team on winning this year’s hotly-contested competition. Not only did Erin, Jordan and Lee show they could handle the pressure of cooking in front of a live exhibition audience but their dishes were incredible and wowed the judges when it came to taste.”