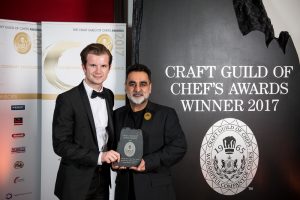 Five restaurants have been expertly whittled down from an impressive list, and duly recognised for their outstanding level of food and service.

The New Restaurant Award shortlist was developed from significant new restaurant openings in 2017 and required no public nomination, with suggestions being made from within the industry. Each of the restaurants were visited and dined at by a team of expert judges who were responsible for deciding the finalists, judging each restaurant on quality of food, service and experience.

Steve Munkley, vice president Craft Guild of Chefs, and a judge in this award comments:

“The search for our 25th New Restaurant of the Year has been a challenging yet exciting process. The five finalists on the shortlist proved to be tremendously impressive, with each one representing a unique set of culinary talents.

The intelligent creations we discovered in our journey to finalise the shortlist was both inspiring and stimulating, and we can expect to see more in the future from each and every one of these talented establishments.”

This year, the majority of restaurants shortlisted are run by women chefs, with three out of the five being female chef-owners. The first one to make the shortlist was Core by Clare Smyth. Smyth was awarded an MBE for services to hospitality and was the first female British chef to hold and retain three Michelin stars. The second, Anne-Sophie Pic at La Dame de Pic, was awarded three Michelin stars for her restaurant Maison Pic in France. MasterChef The Professionals judge, and previous senior sous-chef to Michel Roux Jr at Le Gavroche, Monica Galletti is the third female finalist for her new restaurant Monica Galletti at Mere.

All of the new restaurants shortlisted, offer their own unique take on providing best-in-class dining. Claude Bosi at Bibendum, which is resident in South Kensington’s iconic Michelin building, offers fine dining with signature contemporary and light-hearted flair.

Core by Clare Smyth conjures up an elegant and informal fine dining experience with an emphasis on natural, sustainable food, sourced from the UK’s most dedicated farmers and food producers.

Anne-Sophie Pic at La Dame de Pic invites diners to discover a taste of Valence, France, whilst encounters between different ingredients and flavours, aromas and memories are said to be reflected and reimagined on each plate.

And lastly, Monica Galletti at Mere is said to produce dishes which celebrate the passion and heritage of Galletti herself, whilst blending classical French with South Pacific influences.

Last year’s New Restaurant of the Year was awarded to Vineet Bhatia London (pictured top right), whilst in 2016 it went to Chris White of The White Spoon.

“We are over the moon and couldn’t quite believe it when they announced that we had won, we are so humbled considering the stiff competition we were up against.

Although the award may have my name on it, it is truly a team effort, and it really is down to the hard work and dedication of the management, kitchen and front of house team as a collective.”

The full shortlist of all Craft Guild of Chefs 25th awards will be announced in April 2018 with the awards taking place on 4th June 2018.

New Restaurant of the Year shortlist in full

Craft Guild of ChefsNew Restaurant of the Year award
Share