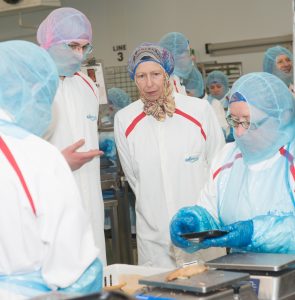 Trout from Scotland was given the Royal stamp of approval when the £3.1m. expansion of the RR Spink & Sons facility in Arbroath was officially opened by HRH The Princess Royal.

The company, which is part of Dawnfresh Seafoods, is one of the UK’s largest processors of seafood.  It uses trout farmed on its sites in Scotland to deliver the highest quality of products for top retailers.

The 170-strong team in Arbroath prepares every product by hand – from curing and smoking to slicing and finishing – producing around 170,000 packets of fish a week.  Dawnfresh employs over 30 staff in farming fish which is then sent for processing to Arbroath and Uddingston, Lanarkshire, as well as being exported abroad as whole fish.

The Princess was shown around the facility by Alastair Salvesen, chairman of Dawnfresh.

During her visit, she witnessed how products were made, from the arrival of the ingredients to the finished product being despatched to supermarkets and other outlets across the UK.