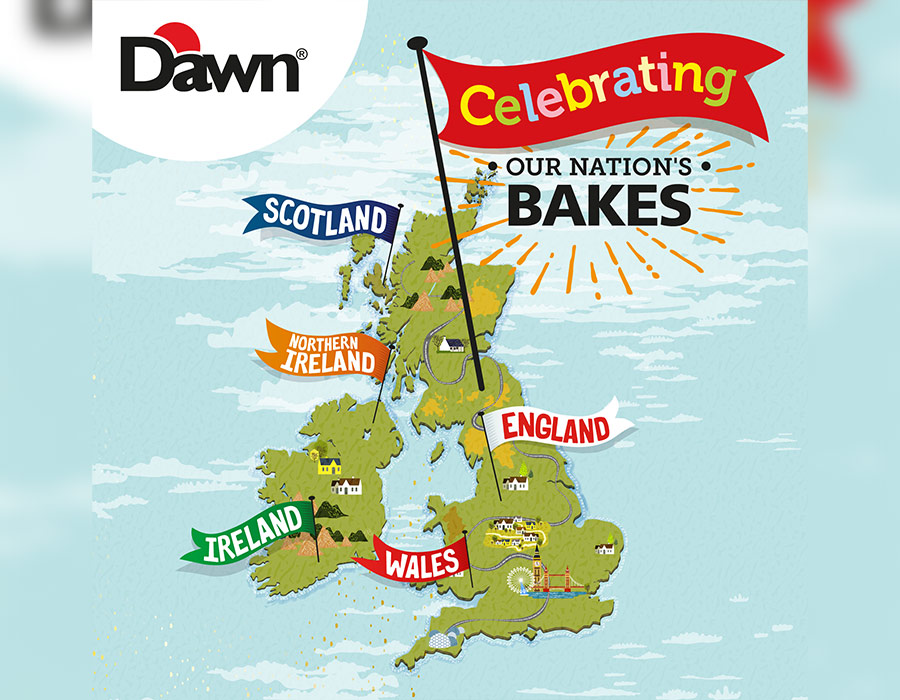 Celebrating the fantastic bakes and inspirational bakers from around the UK and Ireland is the theme of this year’s marketing focus from Dawn Foods.

The ‘Celebrating Our Nation’s Bakes’ campaign will take bakers on a sweet treats tour of the UK and Ireland, discovering traditional and more unusual recipes from England, Scotland, Ireland, Northern Ireland and Wales.

Different ‘hero’ recipes featuring bakes, such as Empire Biscuits, Monmouth Pudding, Devon Apple Cake and Guinness Cake, all re-created using Dawn ingredients, will be unveiled on a specially created map on the Dawn website.  Throughout the year there will be opportunities for bakers to get involved with the campaign, sharing their own local recipes, and taking part in the social media conversation around each region’s bakes.

There will be prize draws for bakers to win bakery related prizes such as oven gloves, Baker’s Toolkits and other campaign themed items. One lucky baker will also have the chance to go on a UK road trip where they can sample some of our nation’s great bakes, as Dawn is also offering a voucher for a seven-day luxury holiday in a fully equipped motorhome as its top competition prize.

Students on the Bakery & Patisserie Technology degree course at University College Birmingham (UCB) will also be sharing bakery recipes from their home regions and how they can be re-imagined for the modern consumer. These may include making an item vegan, gluten free, reducing sugar or giving it a contemporary twist.

“Reduced travelling brought about by the global pandemic has meant that many of us have had time to focus on what is around us, whether that’s the beautiful rolling countryside, vibrant cities, or the coast, and of course the food heritage that is embedded in our national identity. Traditional British bakery is making a big comeback as consumers take comfort in their own heritage and roots.

“Bakers, of course, have always been the bedrock of every community and we wanted to focus on the sweet bakes that are synonymous with different areas of the UK and Ireland. As well as showcasing recipes that bakers will be familiar with, we also wanted to give them new inspiration to try recipes they may not have heard of, and with the help of UCB bakery students, insight into how they can re-invent those bakes for the modern consumer.