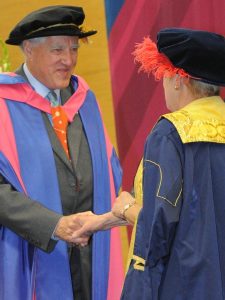 A prominent figure in the UK seafood business, Alastair Salvesen, has been awarded an Honorary Degree by the leading business school, Cranfield University, he having been recognised as a distinguished person who has had a major influence in relevant subject areas.

Mr. Salvesen was originally awarded an Honorary Degree in advanced engineering before going on to gain an MBA in 1966, prior to Cranfield college becoming a university.  He was later made a CBE for his work in the seafood business and for his extensive activities in support of education and charities in Britain

Mr. Salvesen is the chairman of Lanarkshire based Dawnfresh Seafoods, the UK’s leading grower and processor of rainbow trout and of RR Spink and Sons.  This Arbroath company holds a Royal Warrant as fishmongers to The Queen.  He is a past president of the Royal and Highland Agricultural Society of Scotland and of the British Frozen Food Federation and also acted for a number of years as chairman of the Shellfish Association of Great Britain.

Directorships of the Edinburgh New Town Cookery School and Dovecot Studio, a contemporary tapestry business, are amongst his other interests and he served for a number of years on the board of Richmond Foods.

A long term commitment to the training and development of people of all ages is evidenced by his membership of the Scottish Apprenticeship Advisory Board and past governorships of the Fettes College, where he served for more than twenty years and both the Compass and Donaldson’s schools, along with his trusteeship of the Fet-Lor Youth Club.

His other interests include the Salvesen Mindroom Centre and the Scottish Apprentice Advisory Board.

Welcoming the award, Mr. Salvesen said: “I am honoured to be one of the early MBA graduates at Cranfield to be awarded a doctorate.  Cranfield, now a university, continues to be regarded as one of the top business schools in the world”.