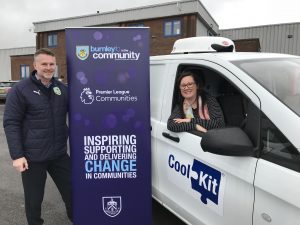 A Burnley business is going the extra mile for a community foodbank by donating a refrigerated van conversion.

CoolKit, based in Farrington Place, have converted the Mercedes Vito panel van into a refrigerated vehicle with the help of their supplier GAH.

The project, called Burnley Community Kitchen, has been set up by Burnley FC in the Community.

It will be based at the former J3 former clothing shop in Market Square and will feature a supermarket-style foodbank, community café, discount sportwear shop and library. It will also provide cookery classes and staff will be on hand to help assess people’s needs.

CoolKit’s van will be used to deliver food to school breakfast clubs, refuges and other causes. It will also collect donations of surplus stock and food nearing its best before date from shops and transport them to the warehouse.

Loredana Emmerson, Marketing Manager at CoolKit, said: “It’s a pleasure to be involved with such a worth project. As ‘friends of Burnley FC In The Community’ we have decided to announce this project as our charity of the year.

Throughout the year staff will be taking part in several events, raising money towards this one goal, as well as the chance to volunteer some of their time to work at the site and interact with the community.”

Shaun O’Farrell, Refrigeration Director at GAH, explains their decision to support the project.

“When GAH were made aware of CoolKit’s commitment to make a difference we did not hesitate in getting involved and with the weight of Burnley FC behind the project, we could immediately see this was a charity opportunity which would actually make a difference.”

Paul France, Deputy Chief Executive Officer of Burnley FC in the Community, thanked CoolKit and other businesses such as Calico, Community Re-Paint, Quorn, Warburtons and Bright LED for their support.

He said: “Twenty of Burnley’s 27 wards are classed as socially deprived, with some of the highest levels of childhood obesity and children suffer from ‘holiday hunger’ when they don’t get free school meals.

“The power of Burnley FC’s brand opens doors and makes a difference. The supermarket-style foodbank will offer people dignity and choice rather than just a food hamper.”

The community kitchen, painted in claret and blue, is expected to open in June and will be open six days a week. For more information visit www.burnleyfccommunity.org

ICELAND LAUNCHES THE ULTIMATE MASH UP DISHES FOR THE WHOLE FAMILY

THE CLIMATE CHANGE IMPACT ON WATER