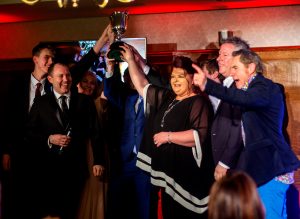 Rising star chefs from colleges from Northern Ireland, Middlesbrough, Farnborough and Jersey battled it out in the kitchen and front of house at the inter-college culinary competition Heat, supported by Samphire. A high-profile chef from each college location led their teams on March 5th and 6th March. Each college cooked a three-course lunch or dinner that was judged by four top chefs in the UK catering industry at the Highlands Academy Restaurant. Front of house students were judged on their level of service. Judges commented that the standard was exceptionally high.
From the ten teams who applied to take part, only three made it to the final to compete with the home team in Jersey. Farnborough College were announced as the winners, with Jersey, the reigning champions for the past two years coming in a close second. The winning team were mentored by Wimbledon Executive Chef Rob Kennedy. Chef Rob Kennedy said: “It is an honour to be recognised in this way and I am so proud of the team. This competition is all about the students and they have worked tirelessly, practising and preparing for Heat 2019. The Farnborough students came here determined to win, and they did it! All of the colleges taking part delivered outstanding services and exceptional food. We have loved visiting Jersey and it was a privilege to lead the team.”
Michelin star Chef Lee Smith of Samphire led the Jersey team from Highlands College. The Middlesbrough team had Michelin-starred Frances Atkins of the Yorke Arms at the helm, and Paul McKnight, executive chef at Culloden Estate, oversaw the South Eastern Regional College from Bangor in Northern Ireland. The chefs gave up time in their own kitchens to mentor the students in the third year of the competition, in the hope to inspire some of them to take up a career in hospitality. Judging the competition were industry veteran chefs Paul Gayler MBE, Stephen Scuffell and Henry
Brosi.
Paul Gayler said it was incredibly hard to pick a winner this year, joking that he and his fellow judges “had to get up early this morning to determine where they’d lost points, the level was so high.”
Visiting student chefs also explored the island whilst they were on the island and they were taken to meet local suppliers to see some of Jersey’s best local produce at its source.
Dave Chalk, Eileen Buicke-Kelly the Heat co-organisers commented: “Congratulations to the Farnborough team for winning Heat 2019. All four colleges raised the bar again throughout the competition. We hope that more colleges will enter the competition next year. We want to bring colleges into Jersey and Jersey into the colleges.”