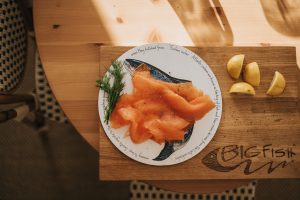 JCS Fish in Grimsby is celebrating strong results for its BigFish™ range in this year’s Great Taste Awards, particularly for its two BigFish Traditional Smoked products which were each awarded Two Star status.

The Guild of Fine Food’s Great Taste awards are an acknowledged benchmark for quality and, with their rigorous judging process, are sometimes described as the ‘Oscars’ for British food.  BigFish Traditional Oak Smoked Salmon and Traditional Oak Smoked Sea Trout were each rewarded with two stars, with BigFish Lemon & Pepper Breaded Salmon Bites receiving one star.

Feedback from the judges included (for BigFish Lemon & Pepper Bites): “The fish is whole and chunky, the lemon crumb seasoning is even, crisp and golden.  Very moreish.”

Judging comments for the smoked products included for BigFish Smoked Salmon: “Wonderful texture, we could eat a lot of this.  A skilled hand at work” and for BigFish Smoked Trout: “The smoke aroma is very well balanced, smooth and rounded… sensational.”

Andrew Coulbeck, founder and MD of JCS Fish said; “We are over the moon to get such a fantastic endorsement from the Guild of Fine Food.  It is testament to the hard work of our small team here in Grimsby plus the benefit of our long family experience and heritage in fish smoking.”

All of these products are listed by Ocado and also sold direct from the BigFish website.  They are also stocked at many independent retailers around the UK.