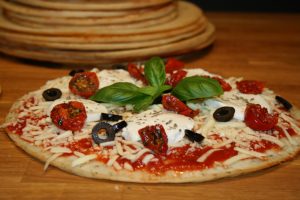 As demand for gluten-free products soars, frozen food distributor Central Foods has revealed that if all the 12-inch gluten-free pizza bases it sold in the last year were laid end-to-end it would measure 250 times the height of the Leaning Tower of Pisa.

The Northamptonshire-based company, which supplies foodservice outlets across the UK and abroad, reports a growing demand for free-from, vegetarian and vegan items.

And with Coeliac Awareness Week 2017 approaching in May, the firm has been reviewing its most popular gluten-free items.

“Coeliac UK estimates that there are now over 1.3 million Britons or 3% of British adults following a gluten-free diet. In addition, 8.58 million, or 13%, are avoiding gluten in their diet, so it’s hardly surprising that we are seeing an increase in demand for gluten-free items from foodservice operators such as pubs, restaurants, hotels, coffee shops and other outlets,” said Gordon Lauder, MD of frozen food distributor Central Foods.

“We are proud to have been supplying the catering industry with frozen, ready-prepared, sweet and savoury gluten-free products since 2009, and to have worked with Coeliac UK to raise awareness about the issue in the industry.

“While many foodservice operators already include gluten-free items that are suitable for coeliacs on their menus, Coeliac Awareness Week, from 8th to 14th May, is the chance for them to offer additional gluten-free items – perhaps as specials or extra dishes. It’s also the chance for operators to consider joining the Gluten Freevolution – a new campaign being launched by Coeliac UK.”

Central Foods, which is based at Collingtree near Northampton, supplies more than 220 independent wholesalers, as well as larger national and regional wholesalers. It also supplies to foodservice caterers across the entire foodservice industry, including pubs, hotels, restaurants, staff canteens, schools, hospitals, coffee shops, football grounds and universities.

Offering a one-stop shop to the foodservice sector, it sources products from around the world and the UK, supplying more than 400 different lines, ranging from meat, bakery items and canapés through to buffet products, desserts and puddings.