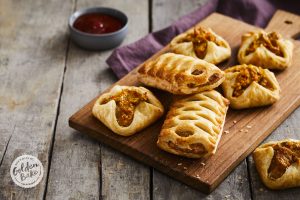 The Jambon goes Vegan!
While Golden Bake, who draw on a 30 year heritage, are best known as the home of the iconic Ham & Cheese ‘Jambon’ / Crown, the company is firmly focussed on the future, recognising the growing appeal of the vegetarian and vegan diet.

“Our goal is to do what we do best – which is to create delicious, convenient pastry products – for all our customers, including those who are moving towards a plant-based diet, or who simply want to cut back on meat” says CEO Robin Jones about the launch.

The new range includes a Vegan Sausage Roll, with a fragrant herb-infused soy protein filling, and a Vegan version of the famous “Jambon” with a rich, lightly spiced Curried Cauliflower and Sweet Potato filling. Both are encased in Golden Bake’s light, flaky Puff Pastry which boasts 100 layers. The range was created with taste and convenience in mind, and will be available at hot counters as an enjoyable and filling snack for health conscious consumers.

Both products are now available in a bulk-in-box offering for the Foodservice market. The new range will also be launched directly to consumers as a vibrant new brand available in the retail freezer aisle by the end of the year.
Image: The brand new Vegan Range from Golden Bake, featuring a Vegan Sausage Roll & Vegan Curried Cauliflower & Sweet Potato Mini “Jambon” / Crown.

Innovation at Golden Bake
The new Vegan range is the latest in a series of innovations from Golden Bake, which has already fuelled significant growth over the past 2 years. Golden Bake CEO, Robin Jones, expanded on Golden Bake’s future plans, saying “We have recently invested in a new test bakery and expanded our New Product Development team as we are committed to creating the tastiest and most innovative products in the Puff Pastry industry. We have seen phenomenal interest in our new product ranges and are delighted to launch our Vegan Puff Pastry range. We have also increased our production capacity to satisfy the increased demand as we are on course for 30% revenue growth across the company in 2019”.

This year saw Golden Bake celebrate the first annual “National Jambon Day” on Bank Holiday Monday March 18th, the day after St. Patrick’s Day, when the company’s famous Jambons were shared around Ireland in a national campaign. The Vegan option will feature prominently in next year’s celebrations, and are available in time for World Vegan Month in November.

More and more consumers – particularly millennials – are embracing a plant-based diet, mainly driven by health, environmental or animal welfare concerns. The number of U.S. consumers identifying as vegan grew from 1% to 6% between 2014 and 2017 – a 600% increase – according to GlobalData. This increase has led the Economist to call 2019 ‘The Year of the Vegan’.

With these developments in mind, Jones explains that “Our aim is to create Vegan products that are tasty, enjoyable, and accessible, so that health & environmentally conscious consumers don’t feel like they’re missing out on anything.”
Image: The Vegan Curried Cauliflower & Sweet Potato Mini “Jambon” / Crown

About Golden Bake
Golden Bake has been making the finest frozen Puff Pastry products in Dublin, Ireland, since 1987 and are industry experts in Puff Pastry production. With a wide range of sweet, savoury and unfilled products using the traditional French method of lamination, Golden Bake pride themselves on having the highest quality pastry in the market with 100 light flaky layers in all products.
Providence and supporting local suppliers has always be a cornerstone to Golden Bake’s success. Golden Bake are also very focused on New Product Development and have an exciting range of new products to launch before the end of 2019 and throughout 2020.