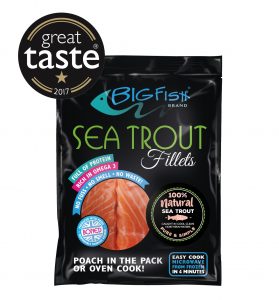 A year after launching BigFish Brand™ Sea Trout Fillets, JCS Fish is pleased to announce that the product has won an award in the ‘Oscars’ of the fine food world, the annual ‘Great Taste’ awards.

Organised by the Guild of Fine Food, Great Taste sets a nationally acknowledged benchmark for fine food and drink, highlighting products which have been tested and approved for flavour, presentation and overall quality by a team of highly qualified judges and food writers.

BigFish Brand Sea Trout is made with a strain of farmed rainbow trout (Oncorhynchus mykiss) which is slow grown at sea, producing a fish with full marine flavour and firm flesh that is an excellent alternative to farmed Atlantic salmon.   It was added to the BigFish range last year using the same format – individually wrapped frozen fillets of fish which can be poached in the pack, microwaved or baked straight from frozen.  The products are a highly convenient option for time-poor consumers looking for healthy meal ideas.

Director of Grimsby-based JCS Fish, Louise Coulbeck, says, “It is fantastic to have our faith in Sea Trout reinforced by this award.  The fish is still relatively unknown in the UK market, it has its own flavour and character and we felt it deserved to be made more widely available.  Like salmon it is rich in Omega3 and it complements our range perfectly.”