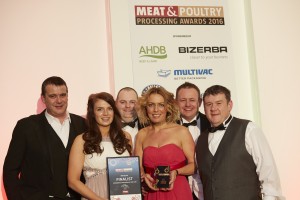 North Wales’ leading foodservice company has scooped a top national award for the quality of its own-brand meat.

Harlech Foodservice’s Bwydlyn butchery has been named National Foodservice Processor of the Year at the Meat & Poultry Processing Awards 2016.

Bwydlyn-branded meat has proved a huge success for Harlech Foodservice since it was launched in 2012. It started when the wholesaler bought a butchery business close to its Criccieth head depot, and is now worth around £4m a year to the business.

The Meat & Poultry Processing Awards is recognised as the leading awards ceremony in the meat and butchery industry, celebrating excellence and innovation within the sector. 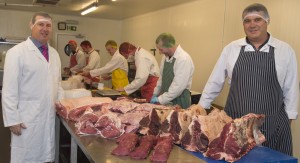 Bwydlyn stocks a range of beef, lamb, pork and poultry products, and sources produce from a number of Welsh farmers and producers.

Butchery manager, Emlyn Roberts, said: “Being crowned champions was a very proud moment and testament to all at Bwydlyn and Harlech for their hard work in building the business over the past three years.”

“To be selected as a finalist for this award was an achievement in itself considering we only entered into the wholesale sector with five staff members back in 2012.

“We now have 20 people working in the butchery, and we have plans to expand further over the coming 12 months.

“The ambition now is to continue to improve this side of the business. We’ve just won a significant new contract to supply meats to Gwynedd schools, and will soon be launching our new retail range, Porthmon.”

The award is the latest for Harlech Foodservice in what has been a busy start to the year for the wholesaler, having been named on the London Stock Exchange Group’s 1,000 Companies To Inspire Britain 2016 report.

The Criccieth-based wholesaler also hosted its most successful ever trade show in February. The event, at Venue Cymru in Llandudno, was attended by more than 2,000 foodservice industry professionals from across Wales, the North West and Shropshire.

Andrew Foskett, co-managing director of Harlech Foodservice, said: “We’ve invested £400,000 in our butchery over the last three years, and this award is a fantastic indicator of how much of a success it’s been.

“Four years ago we saw research which showed that about 16 to 18 per cent of food spend is on fresh meat, which prompted us to invest in a local butcher.

“It’s now on course to generate turnover of £10m by 2020, and that success is down to the tireless work of all of our staff on that side of the business.”

Harlech Foodservice employs 150 people and had a turnover of £25m in 2015, operating from depots in Criccieth, Chester and Shrewsbury.