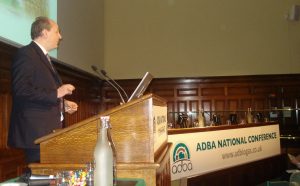 The UK Anaerobic Digestion and Bioresources Association (ADBA) recently celebrated its 10th Anniversary supporting the anaerobic digestion industry.  The organisation, then known as the Anaerobic Digestion and Biogas Association, was set up by Lord Redesdale and ten founding members to remove barriers to the expansion of the AD industry and develop industry best practice and standards.  The name was changed in 2014 to reflect a broadening remit to include emerging technologies and products from the bioeconomy.

Within weeks of its launch, ADBA, already led by its current Chief Executive Charlotte Morton, hosted its first National Conference and a few months later the first AD-specific trade show in the UK, which then welcomed 65 exhibitors.  Since then, in addition to supporting members with trade events and market reports to stimulate business and knowledge sharing, operational guidance publications to promote good practice, Awards to celebrate the industry’s pioneers, ADBA has been steadfast in lobbying government, working closely with members and stakeholders to secure policy incentives and investment for the industry.  ADBA’s latest achievements include a strong presence for AD within the Government Resources and Waste Strategy, committing to mandatory separate food waste collections in England by 2023, and a pledge in the Chancellor’s Spring Statement last year to increase the proportion of green gas in the grid.

Over the years, AD has been increasingly recognised as a significant technology to decarbonise the UK economy across multiple sectors and produce home-grown renewable heat, electricity and transport fuel, as well as vital, soil-restoring natural fertiliser.  In her role as Chief Executive, Charlotte Morton has overseen ADBA facilitating a 350% growth in the sector, with nearly 650 plants being commissioned, a workforce raising to between 3,000 and 4,000 people and a capacity reaching nearly 1GW of electricity-equivalent, enough to power over 1.2 million homes.  AD has been able to reduce UK greenhouse gas emissions by over 1% – a figure which, with the right policy and funding support, could rise to 5%.

As we look to the future and the next 10 years, we are faced with one of the largest challenges of our generation. The coming decade is a critical period for addressing the climate crisis, and AD is a vital part of the solution. While other technologies such as hydrogen and electricity for large vehicles are still in development, AD provides a ready to use technology that can be deployed now to slash emissions in these hard-to-decarbonise sectors.

Charlotte Morton said: “Within the last decade, AD has become one of the most innovative and important industries in the UK. It has demonstrated the critical role it can play in addressing climate change and in meeting the UK’s commitment to net-zero emissions by 2050.  We can be very proud of our progress, and we would like to take this opportunity to thank all our members for their support and their dedication to our industry that made it possible.  There is, however, a lot more that we can achieve in the next 10 years.  In addition to reducing the UK GHG emissions by 5%, we could meet 30% of domestic energy demand and provide 30,000 new green jobs, largely in rural areas.  We have also developed world-leading expertise which gives the UK AD industry a real opportunity to be at the heart of the growing global biogas industry.

With the support of our members, we will continue to work to ensure the AD and biogas industry responds effectively to both UK and global challenges and takes its rightful place in the development of a sustainable circular economy.”