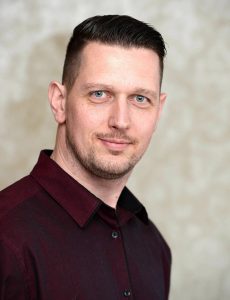 The sky’s the limit for Health and Food Safety Manager Mark James as he takes up the challenge to raise thousands of pounds by taking to the skies for a charity skydive on the 29th July and all in aid of UK children’s charity Winston’s Wish.

Mark, who works for multi temperature distribution business Oakland International, is always looking for new ways to challenge himself and push the boundaries, both in work and in life in general.

After chatting with his wife about the possibility of doing a 15,000 ft. skydive for his 40th birthday, currently he’s only 35, last Christmas she surprised him with a 7,000 ft. skydiving present, which started the idea of raising money for charity.

Said Mark: “I’ve never jumped out of a perfectly serviceable Aeroplane before, and it really does go against the grain as a health and safety professional but knowing that there are so many children throughout the UK dealing with the loss of a parent is heart breaking and if I am able to achieve just 1% of my overall fundraising goal of £1 million it will be amazing!”

Although not personally experiencing bereavement as a child, Mark is very close to his sister following their parents’ divorce when he was only seven. And as their father worked hard to be both mum and dad, it meant he and his sister didn’t see very much of him during that time.

A natural philanthropist, Mark donates his time and professional expertise to help a range of causes and children’s charities including Winston’s Wish and supporting Redditch and Bromsgrove charity the Oakland Foundation, Mark is now working hard to raise awareness and gain pledges of support and donations for his skydive from family, friends and work colleagues.

Added Mark: “By facing my fears and jumping out of a plane, if I am able to achieve just 1% of my fundraising goal, which is a staggering £10,000 – will be an amazing personal achievement before I’m 40 and definitely a new and memorable way of celebrating our July wedding anniversary.”

The charity needs to raise £2.6 million annually to help support children, young people and their families after the death of a parent or sibling, and with 41,000 UK children bereaved every year and more than 100 children bereaved every day, Winston’s Wish is actively supporting 40,000 children  every year.  Please visit:  https://www.justgiving.com/fundraising/Mark-James-7000ftSKYDIVE for more information and to make a donation to help Mark reach his fundraising goal.