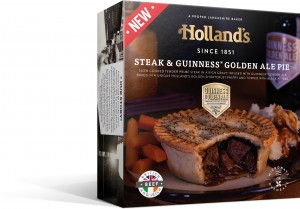 The launch follows an extremely successful line of products for the partnership, which has driven incremental growth in both the frozen and chilled pastry categories and includes puddings, pies and slices.  Not only popular with consumers, the range has also been recognised at an industry level, with GUINNESS Steak Puddings receiving the Highly Commended accolade at The Grocer’s 2015 New Product Awards.

As the latest addition to the Holland’s GUINNESS line-up, the individual Steak & GUINNESS Golden Ale Pie includes slowly cooked tender prime steak, sourced from trusted British & Irish farmers, in a rich ale gravy, featuring the light, hoppy notes of GUINNESS Golden Ale, baked in Holland’s unique shortcrust pastry and topped with cracked black pepper.   Holland’s wealth of knowledge and years of tradition have been used throughout the cooking process, supported by GUINNESS flavour experts, to ensure the final taste is pure perfection with the unique taste of GUINNESS Golden Ale.

With a recommended retail price of £1.75, the Steak & GUINNESS Golden Ale Pie is now available in selected Co-op stores and is due to launch in Tesco later this winter.  Suitable for the oven or microwave, the product is incredibly versatile and can be prepared in under four minutes.

Offering a unique proposition to the chilled pie category, this new addition to the Holland’s GUINNESS range aims to attract a new shopper to the category whilst extending the variety available for those already loyal to the licensed range.

“We’re really excited about this new addition to our GUINNESS collection.  Our frozen GUINNESS range has driven incremental spend within the pie category and we see huge potential given the size of the pie market in chilled.

“Our partnership with GUINNESS is something we’re incredibly proud of.  It’s not often that you find two brands with as much heritage and expertise as we share, not to mention the extremely loyal fan bases both companies have built over the years.  We look forward to building on our success together with the new Steak & GUINNESS Golden Ale Pie and offering our customers a tasty new pie experience to enjoy.”

Retailers interested in stocking any of the Holland’s Pies ranges can call 01706 213591 or visit http://www.hollandspies.co.uk/trade/ for further information.