ICELAND HELPS TO IMPROVE SEAFOOD SUSTAINABILITY THROUGH LAUNCH OF ‘WHAT THE FISH?’ 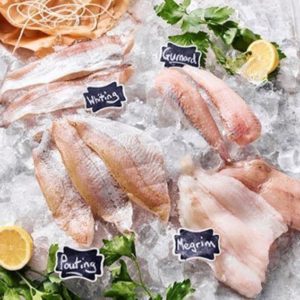 Iceland has become the only UK supermarket to sell four types of British fish commonly caught as ‘bycatch’ through the launch of its latest product: What the Fish?

Bycatch, in the wild capture fishing industry, is a fish or other marine species that is caught unintentionally while fishing for popular target species such as cod, haddock, sole, plaice and salmon.

Pressure has been growing on retailers to address the sustainability of seafood.

Global fish production is approaching its sustainable limit, with around 90 per cent of the world’s stocks now fully exploited or overfished, and a 17 per cent increase in production forecast by 2025, according to the UN Food and Agriculture Organisation (FAO)[1].

Some fish and shellfish species caught as bycatch in the UK may be supplied to overseas markets, while others may simply be discarded as waste[2].

In total, 38 million tonnes of sea creatures are unintentionally caught globally. That is 40 per cent of the total fish catch worldwide[3].

Iceland’s Managing Director, Richard Walker, said: “Enjoying fish that is traditionally seen as bycatch gives us more variety and also helps make eating fish more sustainable.  The more that supermarkets can do to encourage customers to try to new options, the better for the planet.”

What the Fish? includes the species grey gurnard, pouting, megrim and whiting.

Before launching the new product Iceland commissioned research among 2,000 UK adults which found that nearly 80 per cent had no idea what bycatch meant; with seven out of 10 believing UK food retailers need to reduce bycatch or make greater efforts to sell ’non-target fish’ once informed.

The research also found that a third of Brits are worried about the sustainability of fish.

Andy Gray, Trade Marketing Manager at Seafish – the public body that supports the £10b UK seafood industry – said: “People have a tendency to eat the same food all the time, especially with fish, so it’s great to see gurnard, megrim, pouting and whiting on the shelves in Iceland.

“On any one day it is estimated that there is in excess of 100 different types of fish and shellfish available to eat in the UK so anything that encourages us to try something new is fantastic. In order to lessen the demand on the more common products, we actively encourage people to be more adventurous and try a wider range of seafood.”

Iceland’s Head Chef, Neil Nugent Commented: “Grey gurnard, whiting, pouting and megrim are incredibly tasty, versatile fish. We wanted to make these species available to more shoppers to help them widen their repertoire of white fish. We are also clearly helping to improve the sustainability of UK fisheries by not discarding good, edible fish as waste, or racking up more miles of transport by sending it to markets overseas.

“‘What the Fish?’ is a natural continuation of our sustainability commitment, which has seen Iceland become the UK’s first major supermarket to commit to removing plastic packaging and palm oil from its own label food.”

What the Fish is available now in selected Iceland and Food Warehouse stores across the country and and costs £8 for an 800g pack with a minimum of two fillets of each variant.