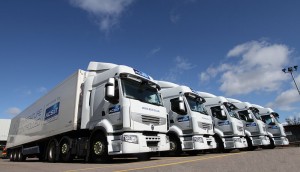 Latest financial results for food logistics specialist ACS&T Logistics showed an operating profit before exceptional costs of £0.5million to December 27, 2014, against a 2013 figure of £1.2million, despite an increase in turnover from £20.5million to £21.3million.

Managing director Malcolm Johnstone said the results were in line with company expectations given the competitive environment in which the business operates.

Mr Johnstone said: “Against a challenging economic climate, we have remained focused on delivering a quality service and providing greater value for customers, enabling us to build on our relationship with key clients.

“A good example of this was the opening of a new cold store in London at the half year, on behalf of a client, enabling it to expand its service offering to include case-level van deliveries into the south of the country. The revenue from this operation was one of the main reasons for the overall increase in turnover.

“Transport turnover increased, but at lower margins due in part to competitive pressures on rates and also increased subcontracting costs. The decrease in profitability of the transport operations is the main reason for the reduction in operating profit,” he said.
2014 also saw considerable capital investment in both ACS&T’s commercial vehicle trailer fleet and its properties.

The investment included £0.8million on a fleet of longer trailers, which has been shown to provide significant value to a key client by reducing the number of deliveries required.

Another £0.3million was invested in new energy efficient LED lighting within ACS&Ts cold stores to help reduce energy consumption in line with the company’s climate change agreement.
Mr Johnstone said: “This continues our strategy of continued investment in the business to ensure long-term profitable growth.

“The investment was made using cash reserves, rather than through debt and this is an indication of the financial strength of the company.”

In 2014, all new warehousing employees were inducted on to the QCF logistics training programme, in common with existing warehouse staff who completed this in 2013.
A number of staff in the customer service and engineering departments started an apprenticeship training programme.

Looking to the future, Mr Johnstone said: “The company is investing in a new regional office at our Wolverhampton site to provide a state-of-the-art working environment for our employees and customers.

“The competitive environment remains difficult however with over-capacity in the market, resulting in pressure on customer rates.

“We’ve established a strong platform for growth going forward, we’re firmly focused on the future and the next stage of development.”

Plans are already in place to further expand ACS&T’s operational footprint by establishing out-bases in other areas of the country in 2015.

As a subsidiary of the international group Camellia Plc, ACS&T’s expertise in multi-temperature food logistics goes back nearly a century.