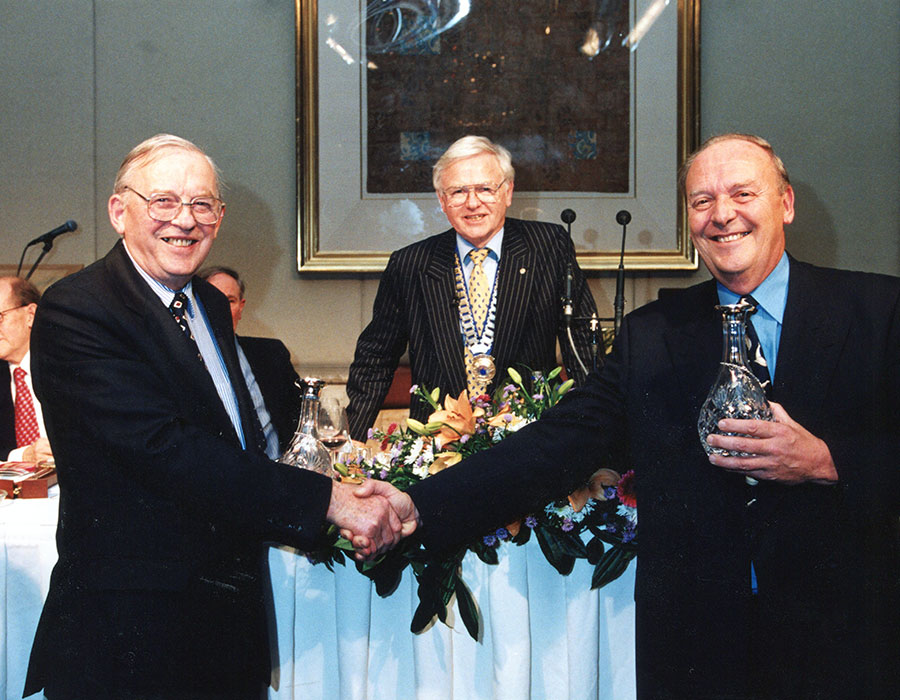 His family has informed us of the sad loss, at the age of 95, of John Oldham, a long-term member of both the industry and the Federation.

John Harvey Ridge Oldham (JHRO) was born in Nottingham in July 1925. After education at Oakham School, and serving an apprenticeship with Notts Bakery, Letchworth, he joined the long-established family confectionery and catering firm, Oldhams Ltd of Newark, eventually taking over leadership on the death of his father, John E. Oldham, in 1957.

JHRO was an early adopter of frozen foods. Alongside running the family business, in June 1948 he registered a new company, Oldham’s Frozen Foods Ltd, for the wholesale of frozen food and ice cream. Two years later, in March 1950, he joined NAWDOFF, the precursor of BFFF, as member no. 42. Ventures included the organisation in 1959 of a Frozen Food Fair in Newark Town Hall, featuring Birds Eye products. The necessity for two large display cabinets to be lifted into the building by crane caused quite a stir. The event, promoted to local Women’s Institutes, was a sell-out.

After the purchase of an ice machine in 1963, the company diversified into the production and supply of high-quality pre-packed bulk ice. Initially serving catering concerns, to cope with the limited refrigeration facilities available in hotels at this time, a cardboard package was designed which would sit in the corner of an ice-cream freezer; a home-made insulated container, carried on the back of a pick-up truck, allowed the delivery of the packs in prime condition. This proved so successful that, as demand for Polarcube products from catering and food production markets expanded, the company moved out of frozen food wholesaling and was renamed The Ice Company (Polarcube) Ltd.

Further expansion followed when The Ice Company broke into the retail market in 1981. The key was a folding laminated party bag for Polarcube, devised by JHRO, which initially attracted orders from Safeway; other retailers then followed. The pack won a UK packaging award in 1984 and an international award in Toronto the following year.

In 1990, aged 65, JHRO sold The Ice Company, but never fully retired. He continued as a consultant to the Company, including when it later passed into the ownership of the Marr family. He was also active in Federation affairs such in the Stepping Stone awards. At the Annual Luncheon at the Hilton Park Lane in November 1998, he was proud to receive a cut glass decanter from the President marking the 50th anniversary of both the Federation and The Ice Company. At the President’s Reception during the 2010 Luncheon, he was touched to be presented with a magnum of champagne to mark his 60 years as a member of the Federation. Writing in thanks to Brian Young, Director General, he said: “I am today just as enthusiastic for the Industry and the work of the Federation as I was in the 1950s”.  Although advancing age soon made travel to events impractical, retaining a lively mind to the end, he continued to enjoy keeping up with the industry through the monthly Bulletin.

John Oldham died peacefully at home on 22 July shortly after his 95th birthday and was cremated following a funeral service necessarily restricted to close family. He leaves four children, four grandchildren and six great-grandchildren. The numerous messages they have received confirm that he is greatly missed not only by the family but many who knew and worked with him.

John Oldham in 1981, discussing the prototype of the new laminated Polarcube party pack with Rt Hon. Peter Walker, Minister of Agriculture, Fisheries and Food. The pack, designed to break into the retail market, later won UK and World packaging awards.

John Oldham (left) at the 1998 BFFF Annual Luncheon in November 1998, with the cut glass decanter presented to mark the 50th Anniversary of the Federation and The Ice Company.