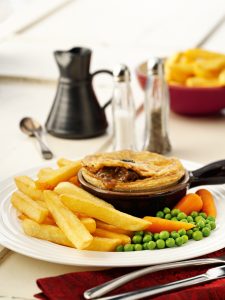 Northampton based pub group The McManus Pub Company is set to benefit from increased profits having taken on the McCain Chip Challenge and been pleasantly surprised by the results.

Comparing McCain Original Choice Thick Cut Chips and cheaper competitor chips, the pub group found that the McCain chips were not only better quality, they delivered an extra eight portions and £20 in the till for every 10kg prepared. With fifteen pubs in the estate, where chips are all a big seller, the potential boost in profits is significant. Watch the video here http://www.mccainfoodservice.co.uk/products/original-choice-thick-cut-916/

“McCain gave us more portions, better quality, and more money in the till. The competitor chips were substandard”, said Lee Byers, Food Operations Manager at The McManus Pub Company, giving his verdict on the results.

“The yield test was genuinely surprising. I was sceptical about how much further they could go in terms of portions, but after seeing it for myself I can testify that they go a long way.

“Visually, the McCain chips were consistent. We had nice sized chips, nice and crispy on the outside and lovely and fluffy on the inside once we broke them up – they weren’t just full of air. The competitor’s, some of the chips did hold up but you could see they were much smaller, they crumbled up, there were black bits and they were generally very poor quality.”