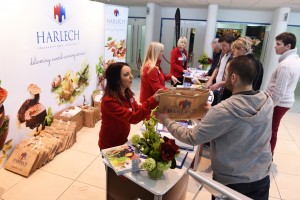 North Wales’ leading wholesale food trade show is set to be even bigger in 2017 after its organisers completed record-breaking sales and attendance figures at this year’s event.

More than 2,000 foodservice professionals from across North Wales, Shropshire and the North West attended the show, which featured new and best-selling products from 147 exhibitors.

And next year’s event will feature at least 30 more suppliers after Harlech Foodservice pledged to increase the capacity for its 2017 trade show.

“Attendance figures were up by 20 per cent on last year’s event, with more than 2,000 people visiting across the two days.

“We’ve worked hard to establish our trade show as the premier foodservice event in North Wales, and some of the show’s growth is down to our expansion into Shropshire and the North West.

“We’re increasingly winning business in both of those areas, as well as North & Mid Wales, and need to plan accordingly for an even bigger event next year.

Harlech Foodservice, which employs 150 people and had a turnover of £25m in 2015, operates from depots in Criccieth, Chester and Shrewsbury.

The wholesaler, which supplies a range of products to the foodservice industry, specializes in sourcing niche produce from across the world. It also manages own-label butchery, ice cream and coffee brands.