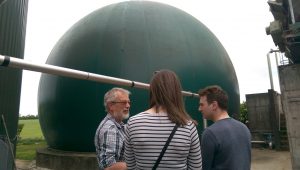 A new conference is set to examine the role that anaerobic digestion (AD) can play in waste management, agriculture, renewable energy generation, and climate change mitigation in Northern Ireland.

The ADBA Northern Ireland National Conference, which will take place on 5th October 2017 at the Europa Hotel in Belfast, is being organised by the Anaerobic Digestion & Bioresources Association (ADBA), the UK’s trade association for AD. A key theme of the event will be how Brexit might impact the AD industry in Northern Ireland over the coming years and how Northern Ireland can take full advantage of the range of benefits that AD offers.

The conference will bring together the entire Northern Irish AD industry to hear about the latest technical and policy developments in AD and to share experiences on how to maximise revenues through raising operational performance, particularly through ADBA’s pioneering Best Practice Scheme.

Northern Ireland has more anaerobic digesters per capita than England, Wales or Scotland, and the Northern Irish AD market has grown by over 2,000% in recent years. 24 new plants have been commissioned since 2015, and the industry is now bringing in £28.5m in revenue and producing 22.8 MWe of electricity each year.

“With more plants per head than any other country in the UK and a phenomenal growth rate to boot, there’s a lot of knowledge and experience to be shared in the Northern Irish AD industry. The ADBA Northern Ireland National Conference is the place to come to find out how the industry can improve performance and reduce costs whilst providing vital support for rural communities.”

Sam McCloskey, Centre Director at CASE and a speaker at the conference, said:

“CASE funds collaborative research and development in sustainable energy in Northern Ireland, and biogas is a key part of our work. Biogas is of increasing importance and value as a biofuel, particularly for transport, and CASE research focuses on optimising the efficiency of AD plant in terms of operational capacity and optimising the resource feedstock.

“I’m looking forward to attending the ADBA Northern Ireland National Conference to share our experience of AD in Northern Ireland and see how we can work with others to help the industry grow.”

Les Gornall, Bioenergy Process Consultant at Capita PROjEN and a speaker at the conference, said:

“As long ago as 1981, I wrote “Northern Ireland has the potential of generating 100 MW (+/- 30 MW) as electricity and hot water from the animal wastes of intensive farms. Most waste is available from cattle”. This study led to the building of the Bethlehem Abbey Monastery digester in Portglenone, the first anaerobic digester in Northern Ireland, which won a string of awards. We are finally getting there in the province and it was heartening to see over 100 planning permissions awarded recently, mainly for farm-based digesters.

“It is difficult to get AD right, but once the tricks have been learned, as they have been by a number of notably successful plants in Northern Ireland, the rewards for people, the environment and the company account are tangible. PROjEN has contributed design, commissioning or optimisation support to plants generating around 35 MWe which gives us the confidence to state that, with care, we can generate sufficient power in Northern Ireland to offset the total domestic energy requirement. That has to be worth working towards.”