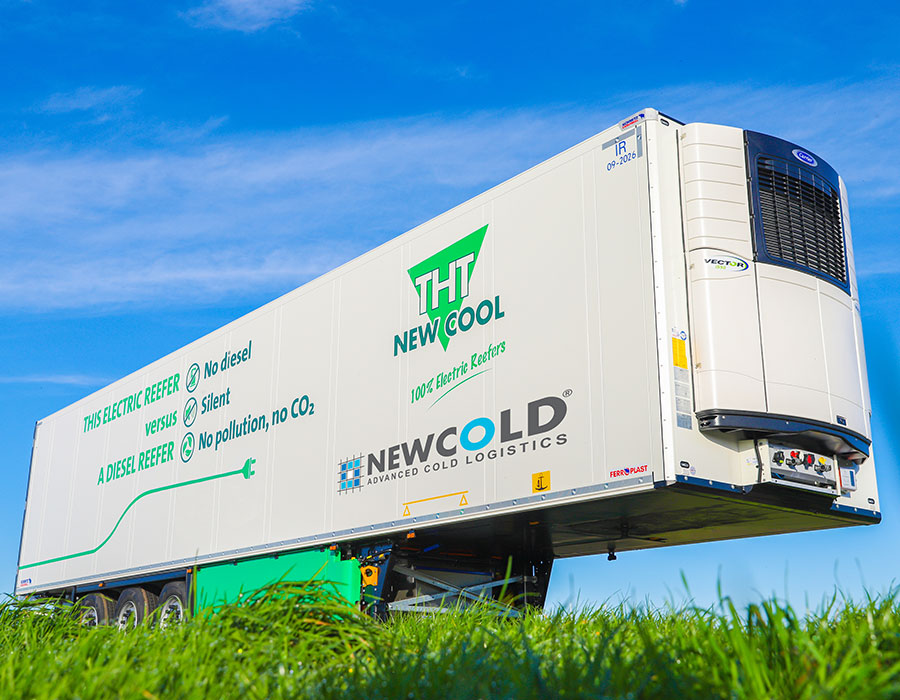 As part of NewCold’s Sustainability strategy the company is taking active steps to mitigate the effects of its operations on the environment.

Accordingly, NewCold has commissioned several 100% electric, THT New Cool refrigerated trailers, which do not require a diesel engine to drive the refrigeration and as such, produce no CO2 emissions or particulates, while operating in complete silence!

NewCold is working closely with its customers to improve their sustainable footprint and the New Cool trailer trials are a ‘very visible step’ towards that outcome.

One of the main components of New Cool’s 100% electric refrigerated trailer is an energy- producing axle. When the trailer slows down, energy is generated by the axle which is stored in an aluminium-encased battery pack. The energy is then transferred to the electric-powered refrigeration system to cool the load inside the trailer.

According to NewCold, the positive environmental impact from using one electrically-powered trailer against its diesel-powered equivalent, has the same pollution-reduction effect as electrifying 141 passenger cars.

Also, 30 litres less diesel is consumed per day when using a THT New Cool reefer (as opposed to using a conventional refrigerated trailer) which is equivalent to approximately 100 kg of CO2. This does not include fuel for the truck, but only concerns the daily fuel to run the trailer’s TRU (Transport refrigeration unit).

Plus, for each trailer operated on behalf of a NewCold customer around 400 loads, including approx’ 13,400 pallets are distributed each year. This amounts to a reduction in carbon output of around 20,000 kilos per annum.

NewCold is a rapidly growing global company specializing in temperature-controlled warehousing and distribution. Its world-class systems, energy efficiency and productivity stand above conventional cold storage solutions. NewCold is partnering with some of the largest food companies in the world to drive innovations in the cold storage industry. With its extensive in-house expertise in executing the entire project lifecycle, it is redefining the design, development and operation of automated cold storages.

NewCold, headquartered in the Netherlands, is developing and operating a network of advanced automated facilities across Europe (United Kingdom, France, Poland, Germany, Italy), Australia, and the United States.www.newcold.com