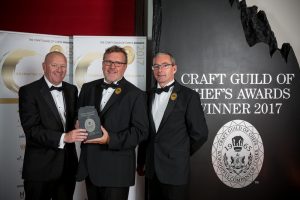 Celebrating 25 years of culinary excellence, the awards recognise and acknowledge remarkable talent across the UK and beyond.

To mark the milestone anniversary, the Craft Guild of Chefs has introduced a brand new international chef award. The prestigious new award will seek to recognise chefs who have had a strong influence on British cuisine and made a significant contribution to the UK hospitality industry.

“The UK foodservice sector is going through a renaissance and we’re extremely excited and passionate about the wealth of emerging and established talent in the industry at the moment.

As the leading chefs’ organisation we champion and nurture talent. Our awards are an excellent opportunity for the industry and the wider market to acknowledge and applaud the work our chefs do, whether they work in a school kitchen, pub or restaurant”

A total of 18 awards will be presented on the night, of which 14 are now open for public entry, including restaurant chef, apprentice chef and pastry chef. The Craft Guild of Chefs will present the additional four awards on the night. These include the inaugural international chef award, innovation award, new restaurant of the year award and the prestigious special award, reserved for someone who the Craft Guild of Chefs believes has made an outstanding contribution to the industry.

“It’s an amazing industry that we’re part of. I’m very, very proud to be given this award. For everybody that’s coming into the industry: it’s a very, very rewarding job, it’s an amazing career and I hope that we can keep encouraging young people to keep coming in, developing and enjoying the job.”

“My other proudest moment was when I was given the special award at the Craft Guild of Chefs awards in 2013 – it’s voted for you by your peers and is like the Oscars for us.”

Nominations will be judged by a panel of leading industry ambassadors and each of the 14 awards is open to chefs both within and outside of the UK. Craft Guild of Chefs membership is not an entry requirement.

The awards will be presented at the Craft Guild of Chefs 25th anniversary ceremony at Grosvenor House Hotel, London on June 4th 2018. Over 800 professionals and industry luminaries are expected to attend. Tickets are available to purchase from http://cgcawards.co.uk/

The awards are free to enter. Entries close 31st January 2018. The full nomination categories criteria and more information is available at: