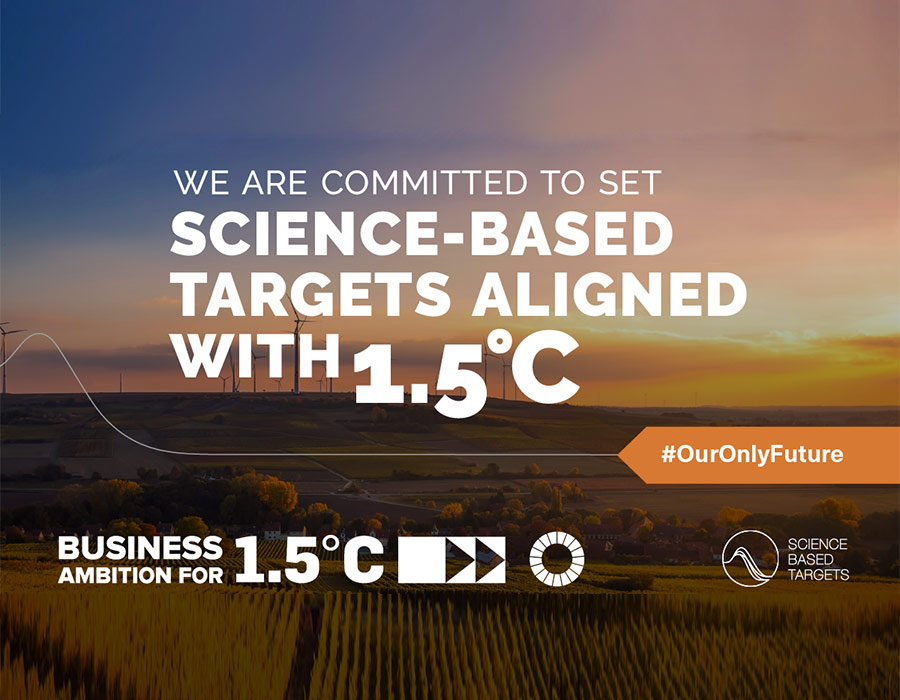 Oakland International has confirmed their environmental commitment, joining the Business Ambition for 1.5oC Campaign of the Science Based Targets initiative (SBTi) and, as a result, has also joined the United Nations Framework Convention on Climate Change (UNFCCC) Race to Zero.

The SBTi is a collaboration between the World Wildlife Fund for Nature (WWF), United Nations Global Compact, Carbon Disclosure Project and is one of the We Mean Business Coalition commitments. Science-based, the SBTi targets are good for the planet and by aligning strategy with the Paris Agreement, science-based targets will help accelerate the transition to a low carbon economy with the aim of avoiding the worst effects of climate change.

Oakland’s Group Head of Sustainability, Ben Attwell, has a master’s degree in Climate Change Finance and Investment from the University of Edinburgh and worked previously for global financial services group Macquarie as part of their Green Investment Group’s Ratings Team.

“By joining the SBTi Business Ambition for 1.5oC Campaign Oakland International is aligning its climate mitigation targets with the most ambitious aim of the Paris Agreement and to what science dictates as being necessary to reduce the destructive impacts of climate change on human society and nature,” said Ben.

“We are essentially committing to reach net-zero global emissions by 2050 at the latest to limit global warming to 1.5oC. Encompassing the whole of the Oakland Group, including Oakland Distribution’s heavy goods vehicles, Oakland have set themselves a big challenge!”

Oakland International has a reputation for being environmentally active and championing initiatives to reduce its carbon footprint, recently committing to install circa. one megawatt of solar-PV at their Bardon facility as well as adding to their existing solar generation capacity across all sites and is working towards becoming a Certified B Corporation. The business has also replaced pool cars with electric and hybrid models and operates an employee electric bike scheme amongst many other environmental initiatives.

Net zero emissions and carbon neutrality are very different with many confusing the two.

For companies to reach a state of net zero they need to achieve a scale of value-chain emission reductions consistent with the depth of abatement achieved in pathways that limit warming to 1.5°C with no or limited overreach and neutralise the impact of any source of residual emissions that remains unfeasible by permanently removing an equivalent amount of atmospheric carbon dioxide.

Carbon neutrality is defined by an internationally-recognised standard ‘PAS 2060’ which sets out quantification requirements for the reduction and offsetting of greenhouse gas emissions. The definition of a carbon neutral footprint is a ‘condition in which during a specified period there has been no net increase in the global emission of greenhouse gases to the atmosphere as a result of the greenhouse gas emissions associated with the subject during the same period.’

Added Ben: “Our customers are increasingly aware of the effects their choices have on the environment, with a brand’s reputation for sustainability of paramount importance. By signing to this initiative our customers can have confidence that we are a credible and ethical supply chain partner with long-term targets to reduce our environmental impact based on the latest available science.

“We are currently measuring our carbon footprint and as soon as this is done, we will be able to set ambitious short-term and long-term targets in line with our commitment to the SBTi. Transport and distribution represents a huge part of every company’s scope 3 GHG emissions, which essentially are all indirect emissions that occur in a company’s value chain. The Oakland Group’s net zero target will be achieved well before 2050 and we strongly believe that by committing to the SBTi’s definition of net zero that we are committing to the highest level of ambition today and for the future.”

Science-based targets are challenging businesses to realign with the net-zero economy. Oakland customers can be confident that emissions will, over time, significantly reduce, ensuring Oakland International remains lean and efficient and well positioned to respond to future regulatory adjustments as governments increasingly focus on climate action.

BRCGS AA rated, Oakland International operates 24-hours/7 days a week and is a D2C/B2C/B2B specialist in contract packing, storage, picking, food distribution and a brand development support provider for ambient, chilled and frozen food to the retail, convenience, discount, wholesale and food service markets in the UK, Ireland and via their partner in Spain.