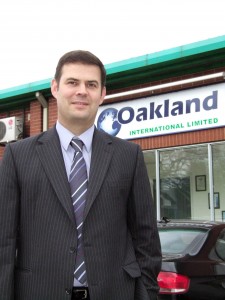 Use of solar photo voltaic technology has already delivered CO2 savings of 103,485Kg to date, helping eradicate Oakland’s summer peak in electricity. The business already has 350kw of solar generation its roofs and plans to increase capacity to 1Mw over the next 12 months are in place. LED lighting throughout their warehouses has resulted in carbon savings of 35,000kg/ CO2. Very high insulation specifications for the roof and walls of the firm’s new cold store, and fitting of a high-spec energy efficient doors, will also greatly enhance energy savings.

In terms of Climate Change Levy targets, compared to similar sized companies which aim to use around 3,445,054kwh of electricity, Oakland International over the past 12 months has used 3,011,519kwh – so in terms of carbon usage, they are producing around 173,413.92Kg of CO2 less than other operators of the same size and stature, in the main achieved through the use of LED lighting in its chilled warehouses, energy efficient heating in its offices and via the installation of solar panels to its warehouse roofs.

Oakland’s strategic development manager, Pete Vaughan, explains: “Solar panels have generated our capability to offset increased demand, even though we continue to expand. The installation of LED lighting has greatly reduced our electricity consumption by some 35% when compared to fluorescent lighting, delivering an annual savings figures worth around £25,000 per year across the site.

“By using voltage optimisation and power factor correction we have also reduced electricity consumption by around 8% – smoothing natural variations in power supply, which can be considerable depending on conditions as changing voltage directly impacts electrical motors and equipment, which in turn can increase energy usage and mechanical wear patterns.”

Oakland also recycles food waste of around 80T per month, instead sending it to a biofuel plant and so reducing landfill needs significantly. Oakland only produce around 1 skip of general waste per fortnight. Oakland also recycles all plastic and cardboard that is produced on site amounting to around 200T per year.

Added Vaughan: “Not every initiative works first time. Early LED designs were poor and trials of energy management software had implementation issues and system operating challenges. We also tried the ‘plastic chicken’ – a device into which you locate warehouse air temperature probes, which is designed to mimic the temperature of food being stored rather than the air around it, which can be easily affected by door openings etc. In theory this means cooling fans are not reacting to air temperature changes and hence are used less. We found it just didn’t work for us.

“Still to be proved and being tested, are the benefits of motion controlled lighting,” he added. “It’s simply too early to tell as setting the lighting is proving a challenge in some areas of our business due to changing layouts. We also have to consider if they are being turned on and off too much in some areas by people passing through and perhaps using extra energy that way”.

With the amount of green technologies available, it’s safe to say that during the course of Oakland’s foray into green energy, they have trialled and tested many initiatives which have delivered way beyond expectation, 2 of which being the use of 10-electric company bicycles and an electric car, used and available to all departments, helping significantly reduce fuel consumption and CO2 emissions.

An additional benefit, and key driver behind numerous decisions to employ alternatives where possible, is the ability to provide retail partners with extra data on how their individual supply chain is greener, and by encouraging more collaboration within the industry, sharing delivery space and reducing the number of empty lorries on the road, customers gain from lower operational costs and reduced road miles, which has the added advantage of keeping prices stable for customers so that they too reap the benefits from Oakland’s energy efficiencies.

Oakland’s MD Dean Attwell commented: “We believe that our green initiatives place us ahead of many of our competitors and they are good for our business image and our bottom line. The Carbon Trust has been a great support for us over the years and has helped evaluate ideas and priorities. We are very happy to share ideas (good and bad) and have presented our initiative at many events for businesses and the most important people, the next generation of entrepreneurs and business people in our schools.”