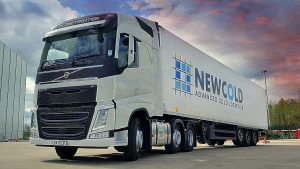 NewCold Advanced Cold Logistics, which is experiencing strong growth in the movement of frozen product being transported into and out of the UK, predicts that supply chain companies with established European coldstore networks and temperature-controlled fleets will be well placed to take advantage of a predicted upsurge in volumes.

That is the opinion of NewCold’s Country Director, Jon Miles, who says that NewCold UK has noticed a strong increase in the amount of frozen food products being transported from the Continent to the UK and vice-versa.

“There is quite a lot of product moved both ways but in particular there’s an unbelievable amount of frozen food that comes into the UK from Europe, particularly from Eastern Europe, including lots of vegetables, etc.

“For NewCold we’re now working with major ice-cream company Froneri, bringing product into the UK from their European factories. They are based all over Europe but we are predominantly bringing a lot of products over from Germany.”

Unlike many other temperature-controlled supply chain operators, NewCold has an established European network of coldstores in place, along with a substantial distribution fleet to serve UK food producers transporting frozen food products from the Continent to the UK and back again.

NewCold has a network of coldstores in France, Germany and Poland along with its highly automated coldstore in Wakefield, UK, where the company recently took delivery of 36 new Euro V1 Volvo FH tractors, as part of a fleet upgrade to meet increased demand for its services. Additionally, NewCold has extended its cold store with 87,500 pallet locations to reach a total storage capacity of over 143,000 pallets with frozen food produce.

“NewCold can help UK customers use our entire European network and our own fleet to move frozen food product around Europe, which can reduce food miles and lead to a more cost-effective operation” says Miles.

Reasons for this growth have been attributed to changing perceptions of frozen food, according to Brian Young, chief executive of British Frozen Food Federation. Research has helped to prove that frozen food retains more nutrients than fresh food, reduces food bills and reduces food waste in professional and domestic kitchens.