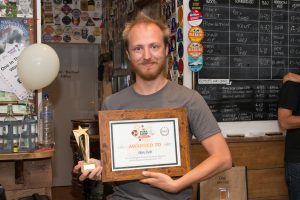 Pork Farms’ national Board Games Championship is now over and they have found the UK’s best board gamer.

The campaign has been implemented by Pork Farms for the last two years, won multiple industry awards and seen the brand generate nationwide engagement with new audiences.

The championship has been created in partnership with the Micropub Association and this year saw over 70 micropubs and hundreds of players take part.

Kent micropub, One Inn the Wood acted as the final battle ground for the last leg of this year’s contest, where players put their gaming skills to the test over five games including Monopoly, Trivial Pursuit and Jenga during National Board Games Week.

Harry Rush, who represented the Admiral’s Arm micropub in Queensborough, came out with the highest score, with second place awarded to Patrick James from the Penny Farthing micropub in Crayford and third place to Adam Miller, from One Inn The Wood micropub in Kent.

New champion Harry, said: “To be named National Board Games Champion of 2017, it’s like a dream come true! I’ve had a great time getting here, playing the heats with my friends and practicing all the way to becoming a finalist.”

This year the campaign has reached an audience of over 3 million, seen 97 articles in the press including 39 pieces of broadcast coverage across BBC channels.

Michael Holton, brand marketing manager at Pork Farms said: “As a customer engagement campaign, the Board Games Championship has had huge success, raising awareness of our brand amongst new audiences, creating nationwide engagement and really reinforcing our brand ethos which is all about celebrating people, communities and the best of British.  The championship has proved to be a real highlight of the UK’s spring and summer calendar and we are all really pleased with its success.”

For more details on this year’s board games championship visit www.pork-farms.co.uk or  https://www.youtube.com/watch?v=rAKNzww2rJ4&t=16s