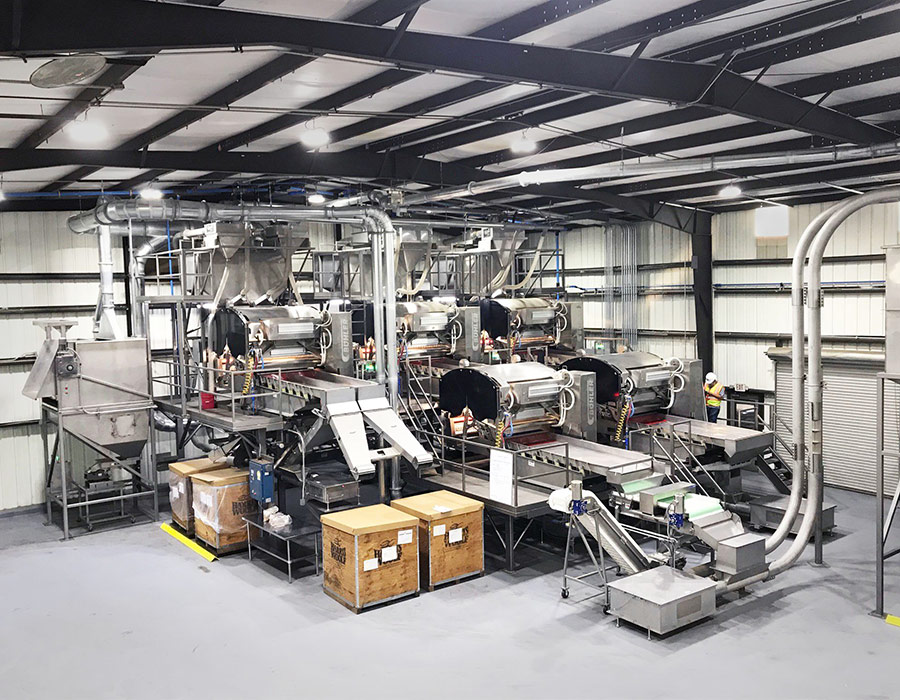 Since investing in a five-strong SORTEX FB2 optical sorting line and an additional stand-alone FB2 sorter, US almond huller processor Harris Woolf has been able to streamline its entire process. 70 m lbs. of almonds which once took 8-10 months to process, now takes the company just 5-6 months. The huller processor has also been able to increase its cleaning and sizing throughput from 12.000 lbs. to 30.000 lbs. per hour, performing all of its cleaning on just one pass. This pre-COVID investment put Harris Woolf in a strong position when the pandemic struck, enabling staff to adhere to social distancing regulations whilst the company continued full operation of its packing line.

Roughly halfway between Los Angeles and San Francisco lies Coalinga, a city in Fresno County on the western edge of the San Joaquin Valley in central California. Just 17.000 people live in Coalinga, but for 30 years it has also been home to the almond processing plant of Harris Woolf, US almond processor and the world’s premier independent wholesale almond product producer.

Harris Woolf is unique for one key reason. Traditionally, hullers are known for taking almonds from the ground, removing the shell and hull to leave the kernel, while processors are responsible for cleaning the kernels and preparing them for shipment to end-users. Harris Woolf however, covers all bases – it’s a rare huller-processor.

Investing in the best technology

The company believes in using only the very best technology, a strategy that continues to deliver great rewards. Which is the reason why Harris Woolf invested in a game changing Bühler optical sorting line for kernels that includes five SORTEX FB2 optical sorters. They also added an additional FB2 sorter in their huller for cleaning in-shell almonds.

“Our average defects are now 0.02% foreign material and 0.62% serious damage, which is roughly a 30% improvement over previous sorters we’ve used. This cleaner material has allowed us to increase our packing line production by 40%,” Carter mentions.

Intake, sorting and sizing takes place on Harris Woolf’s high-speed SORTEX line which has been delivering products ready for export since 2019.

Insect damage, foreign material, and other defects must be removed during the cleaning stage before the almonds reach the packing line. After hulling, the kernels (i.e. natural almonds) are forwarded to the processing stage, where the multistage, multi-pass systems of the four FB2 machines comes into play, through which 30.000lbs/15 tons of almonds pass each hour. A fifth SORTEX FB2 is then employed to clean up any reject material.

Harris Woolf also employs a standalone SORTEX FB2 for preparing the in-shell almonds for export. This machine ensures products are “pack ready” in one pass. “In one process we can clean our almonds and then they’re sized and packaged. A process that used to have multiple cleaning steps now has just one, which saves a lot of time and effort,” Carter states.

He goes on to reveal that Harris Woolf has been able to increase its processing speed massively. “We ran 70m lbs of almonds this year, which used to take us 8-10 months, but now it takes only 5-6 months. The process has been streamlined significantly.  We’ve increased our cleaning and sizing throughput from 12.000 lbs to 30.000 lbs per hour.”

Why did Harris Woolf pick the SORTEX FB2? Carter replies: “Bühler SORTEX’s reputation; their system was more technically advanced; it had a more open design, which is better for hygiene; the cameras; the robust user interface was easier for our operators to use.

“We’ve built up a great relationship with the local Bühler team based in Stockton [east of San Francisco] during our various training sessions with them. This is important because frankly, equipment is only as good as the support you receive on the ground. So, for us, with Bühler it’s been a win-win situation!”