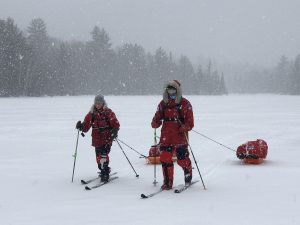 Redditch businessman Dean Attwell has begun preparations to undertake the greatest challenge of his life, to reach the most northern point on the planet the North Pole, and he aims to raise £100,000 in the process for Cancer Research UK.

Set to leave on Monday 10th April, it will take Dean up to 16 long and gruelling days to complete his polar mission, which he has fully funded, personally ensuring all money raised from the expedition will go directly to benefit Cancer Research UK and cancer support work being done at the Christie Clinic in Manchester and the Lingen Davies centre in Shrewsbury.

Said Dean: “Turning fifty this year I decided I’d trek to the North Pole, one of the biggest challenges I have so far undertaken.

“Having lost my mother-in-law to cancer in October 2015 and subsequently seeing the devastating effect that cancer has had on members of my family, friends and colleagues over the last 12 months, I wanted to do something to raise money for a cause which will almost certainly affect each and every one of us, directly or indirectly, at some stage in the future.”

Over the past two-years many people in Dean’s life have been touched by, or have succumbed to cancer. His mother-in-law, Ruby Tuffin Delves, died of cancer in October 2015 and it was her natural spark and huge enthusiasm for life that was pivotal in his decision.  Cancer also claimed the life of a much valued Oakland International team member, Stefan Bakalar, and Simon Ward a fit and healthy young man, instrumental in helping Dean lose weight and train, and John Brown, an 18-year old former head boy, who was a thoughtful and responsible young man and a person who made an everlasting and positive impression on Dean’s son as he started his secondary school education at Bredon School.

Dean added: “The fundraising target I’ve set myself of £100,000 is massive and it will be a significant personal challenge. All expedition costs are covered, so every penny donated will go directly towards Cancer Research UK and the amazing things they do to fight off this indiscriminate disease known as Cancer.”

The expedition will involve 8 to 10 hours of walking each day in temperatures that can drop to -45 degrees centigrade, whilst pulling a 50kg sled containing his tent, food and all his supplies for 2 weeks. Dean recently undertook a training trip to Minnesota, USA, spending a week in freezing conditions, undertaking a testing ice plunge battling the sub-zero freezing conditions, he was prepared and taught the essential survival skills and training he’ll need to get him safely to the North Pole and back.

Dean added: “Please ‘dig deep’ and donate as Cancer is something which can affect even the healthiest of people. Your donation and support will help so many people and make a real difference to their lives.”

You can support Dean and Cancer Research UK by donating to his JustGiving page: (www.justgiving.com/fundraising/NorthPoleDean)