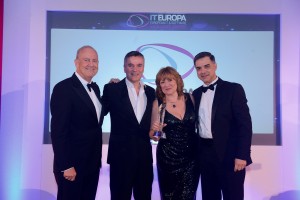 The team at Vecta Sales Solutions are celebrating once again after picking up another prestigious award for the company’s VECTA combined Sales Analytics & CRM service at the 2015 IT Europa awards ceremony on Wednesday evening.
Vecta’s Chief Executive Julian Wassell was accompanied on stage by Jayne Hill to accept the award for the ‘SaaS Solution of the Year’ from former MP now TV presenter Giles Brandreth, watched by an audience of IT suppliers from across Europe. 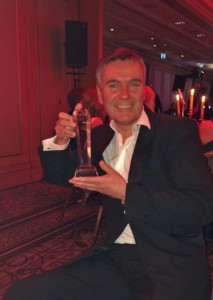 When selecting finalists for the awards the four independent judges were looking for evidence of IT solutions that have transformed businesses. Organiser John Garratt said of the 2015 Awards: “There were many more entrants with a stronger software component this year and the quality of the projects being submitted has risen yet again”.
The Vecta submission for the ‘SaaS Solution of the Year’ was based on the experiences of Lindab UK a Vecta customers, who after having chosen the powerful Sales Analytics & CRM solution, confirmed that they immediately saw sales and performance increases and measured a 30% increase in productive sales activity in the UK by acting upon information that would not previously have been accessible.

Of their repeated success at the awards Vecta Chief Executive Julian Wassell commented: “We are delighted to take this award back to Sheffield with us – the fact that it’s the award for SaaS Solution of the Year is the icing on the cake for Vecta. Huge thanks to Lindab for working with us toward the submissions, we look forward to celebrating this win with them”.