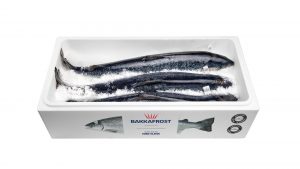 Situated midway between Iceland and the north of Scotland, the Faroe Islands has a population of just over 51,000 – smaller than the cities of Torquay or Durham in the UK.

Yet it boasts an international airline, a Hilton hotel, a two star Michelin star restaurant  and some truly stunning scenery.

It is also home to Bakkafrost, one of the leading world  names in salmon farming products.

The environment and sustainability are at the core of  Bakkafrost’s vision which is to produce the highest quality salmon whilst considering the environment.

This is not just a statement, but is central to  CEO Regin Jacobsen’s declared strategy for the future.

Bakkafrost chairman Runi M. Hansen said: ‘The aim is moving Bakkafrost into a position to be much more capable to meet future opportunities and meet growing global demand for protein, with healthy and efficiently produced salmon products, and at the same time create value for our company, shareholders and society.

‘An important occasion in this direction was the publication of Bakkafrost’s first sustainability report which shows our commitment to keep putting a sustainable and responsible approach to our salmon farming operation at the top of our agenda.

‘The company has invested heavily to establish a sustainable future including the building of a new biogas plant using waste products to produce renewable energy that will not only power its own operations, but also many homes in the Faroes – a project for which it is winning prestigious awards’.

Recently Bakkafrost was  named as being among the Best Performers in the 2019 Coller FAIRR Protein Producer Index, which ranks the world’s largest listed producers on sustainability.

Both customer’s needs and sustainability remains top priority for Bakkafrost as they continue to produce high-quality salmon, responsibly as part of its commitment to Healthy Living.

As well as being named among the best performers this year, The GMO Food and Drug Administration in Germany have certified Bakkafrost according the GMO-free standard which is an add – on to their approved Global G.A.P Certification.

With their mission to produce healthy world class salmon, Bakkafrost has the full control over production and are able to trace its use of marine ingredients from North Atlantic fisheries to feed to the final salmon product.

This enables them to be completely transparent about their sourcing which in turn also enables the company to be confident in saying they are the best-performing aquaculture company on the non-use of antibiotics in the last 15 years and  is one of the reasons why Bakkafrost have recently become a member of the Sustainable Fisheries Partnership (SFP) Ocean Disclosure Project allowing their sourcing policy to be completely transparent to the public.

“Sustainability remains a top priority for us, and we will continue to work towards the strategic priorities in our Healthy Living Plan, which includes minimising our environmental footprint and moving towards having all our sites ASC approved in 2020.” – Torkil Davidsen the Head of Bakkafrost UK Operations

“We are pleased to welcome Bakkafrost to the Ocean Disclosure Project,” said Tania Woodcock, ODP project manager. “Thanks to its fully vertically integrated value chain, Bakkafrost has full control over production”

Bakkafrost are the leading producer of top quality salmon The estimated total volume for 2019 is set at 54.5 thousand tonnes compared to the 44.6 thousand tonnes they produced in 2018.