SELLING LIKE HOT CAKES: ICELAND SEES EARLY DEMAND FOR ITS HOT CROSS BUNS AS FAMILIES GET READY FOR EASTER 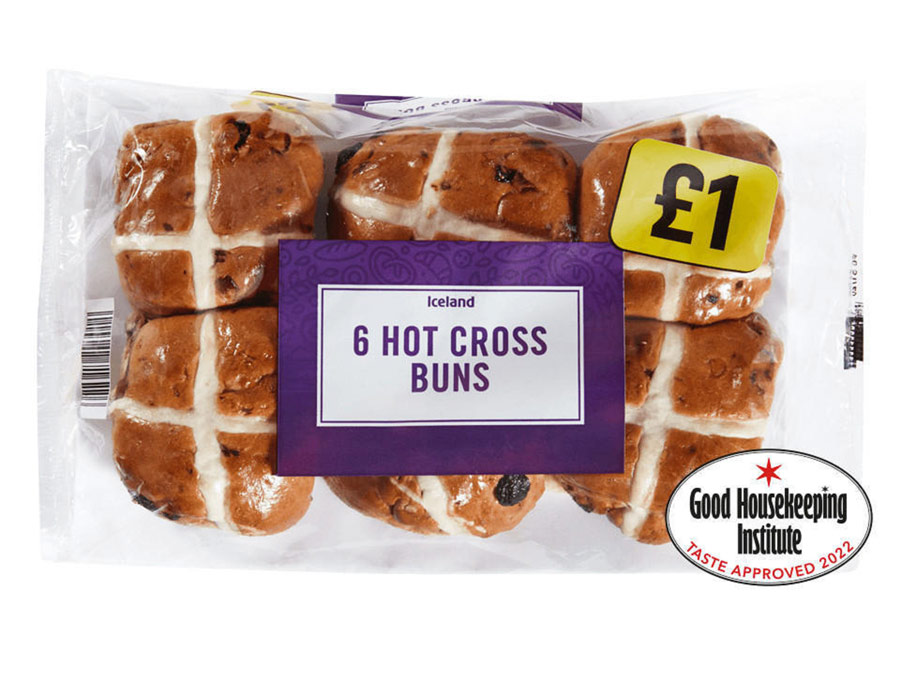 Easter is less than a month away, however Iceland Foods reveals its £1 Hot Cross Buns have been a piping hot commodity for a few months now.

In fact, despite it not even being April yet, the supermarket has revealed that sales of its six pack Hot Cross Buns (£1) – which were voted 2022’s Best Budget Hot Cross Buns by Good Housekeeping – are already 18% higher than last year.

In other words, enough buns to stretch all the way from Preston in Lancashire to Brighton on the south coast have already made their way into Iceland baskets.

Unlike the Easter Egg, Brits don’t feel they need to wait until Easter weekend to enjoy a hot cross bun. And many have had them on the agenda for some time, as Iceland also reveals that shoppers were searching its website for the cheap but tasty treat as early as January of this year.

Andrew Staniland, Trading Director at Iceland Foods, said: “For the past two years, Easter celebrations have taken a hit while the UK grappled with the pandemic and its various lockdowns. So, we know that this year’s event is more important than ever, with lots of families and friends planning on gathering to celebrate the occasion and enjoy some delicious food.

“So, I’m not too surprised hot cross buns were on shoppers’ minds back in January. In fact, considering their year-on-year popularity increase, how they’re still one of the most budget-friendly treats you can buy and the rate they’re being thrown into trolleys right now, buying buns ahead of time might be the smart thing to do!”

New research commissions by Iceland[2] found that the nation enjoys an average of six hot cross buns each over the Easter period – which is conveniently the exact number you get in an Iceland pack, while almost every other supermarket only offers four.

Because of this, and the incredibly good value cost of a pack, Iceland’s hot cross buns were found to be the cheapest per bun – coming in at just 17p. This compares favourably to the likes of M&S, Waitrose and even Lidl, which were all found to be over 40p per bun.

This means that – over in Liverpool, where residents consume an average of nine hot cross buns each – only two packs of Iceland hot cross buns would need to be bought, compared to three from any other supermarkets, a saving of almost £4.00 (Iceland – £2.00 – two packs – and Lidl – £5.97 – three packs).

And it seems that Brits are prepared to shop around until they find the best buns for the best value – with 45% of the nation buying from different supermarkets each year.

The survey also asked Brits how they preferred to enjoy their hot cross bun. Unsurprisingly, most Brits (78%) are toasting their hot cross bun and seven in ten (71%) choose butter as their go-to spread. However, runners-up included 24% opting for a layer of jam on their bun and 15%, who are obviously dedicated to the chocolatey tradition of Easter, are eating theirs with chocolate spread.

It seems quite a few Brits are also setting a whole new trend by turning their hot cross bun into a sandwich with filling. But what have they been having in between? The most popular filling to have in your hot cross bun is a cheese slice (32.5%), followed by cream cheese (27.4%), then bacon (24.9%) and finally Peanut Butter and Banana (23.4%).

And, in a turn up for the books, a quarter of Brits admit to eating theirs whole – with no spread whatsoever.

When it comes to when we like to tuck into our buns, over half of Brits are settling down in front of the telly to enjoy theirs while 30% of us say they like to resist temptation until they can enjoy them with pals.

And finally – in the unlikely situation that there are leftover buns in the kitchen – the survey found that the nation will not be putting them to waste and saving on costs, by making bread and butter pudding (36%), muffins (17%) and breadcrumbs (10%) for other meals. An ideal way to make the most out of hot cross buns and save on meals for the next week.

Staniland added: “However and whenever you eat your hot cross bun, we recommend getting yourself down to Iceland as soon as you can. Easter is going to be a real celebration this year, and we’re thrilled to be able to provide the nation with the best hot cross buns, at fantastic value.”

Iceland’s Hot Cross Buns can be bought in-store or online now for just £1 per pack.

[2] Research of 2,000 adult Brits from the ages of 18 and over was commissioned by Iceland and conducted by Perspectus Global in March 2022.