Shooting for the Olympics on Target Thanks to Sponsorship

Shooting for the Olympics on Target Thanks to Sponsorship 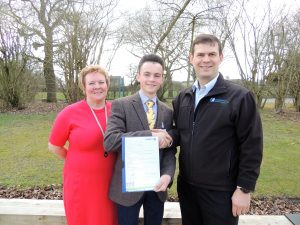 A young man aiming to compete at the highest level in clay shooting is over the moon to have secured business sponsorship that will ensure he can continue training and realise his dream of one day competing at the Olympics.

With sponsorship secured from Redditch family business Oakland International covering gun cartridges, competition fees and funding for his GB kit should he be successful in selection for the Olympic team, Mitchell Brooker-Smith is now well on his way to becoming the Olympic contender he hopes to be.

Said Mitchell: “I feel extremely honoured to have the support of Oakland International and their sponsorship which means the world to me, and it has given me greater confidence knowing that there are people who care about the progression of my shooting besides my family and friends.

“My Granddad, Alan Brooker, is a huge part of my shooting. He takes me to all my training sessions and competitions and without him I would not be able to train or do as much as I do.

“Oakland International’s sponsorship will now mean I can train more for upcoming selection shoots and it also takes the financial pressure off my family, who work very hard to help and support me to get to where I want to be; shooting in the Olympics.”

After taking up shooting at the age of eleven at school, Mitchell was a natural and quickly progressed to become Bredon School’s Colt team captain, and after seeing Ben Llewelin win a silver medal at the 2016 Nicosia World Cup in Cyprus he quickly became his hero, and this was when Mitchell realised Olympic Skeet was his passion, and Ben the person Mitchell aspired to be.

Moving on to English skeet and then Olympic skeet, Mitchell was spotted by a British Shooting scout during a training session with his coach Richard Stepney and given the opportunity to try-out for GB selection through the organisation’s development programme, the Talent Pathway, for young-up and coming shooters, with Mitchell now selected and training hard as part of the Talent Pathway 2018 Team shooting Olympic Skeet.

Parents Anne-Marie Brooker and Phil Smith commented: “We’re extremely proud of everything Mitchell has achieved and so pleased that he’s made the most of every opportunity.”

This year’s 2018 British Selection shoots will decide which athletes will represent GB at the 2018 World Cups and World Championships, and if Mitchell secures his place to represent GB in 2019, he will be on his way to shooting for his place to compete at the Olympics and hopefully reach his other big goal of competing at the Commonwealth Games Birmingham 2022.

Oakland International Chief Executive, Dean Attwell, commented: “A talented young man with great focus, determination and future potential, winning a number of competitions since taking up shooting in 2015 at the age of eleven. We are extremely delighted to sponsor Mitchell and support him, and his ambition to become a future Olympian and hopefully compete at the Commonwealth Games in Birmingham.”