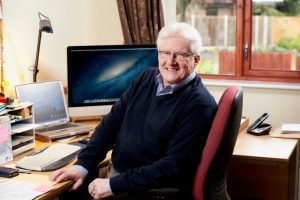 John Catherall has been a significant presence in the UK food industry for nearly sixty years and has been an important factor in the growth and development of companies like Smedleys, Ross Foods, Dawnfresh Seafoods, United Biscuits, Seabay and Faroe Seafoods, the latter now a Bakkafrost subsidiary based in Grimsby.

Having joined Faroe Seafood, Mr. Catherall immediately identified an opportunity to build sales of the company’s high quality salmon, farmed in the clean waters around the Faroe Islands and focussed initially on the Irish Market, he having lived there for ten years.

“I soon became a “trusted advisor” to this new and exciting market and created a workable logistics plan to enable the reliable delivery of fresh salmon to all 32 counties twice a week,” he said.

He quickly learned that the short life fresh fish sector had to be handled very differently from the frozen market with which he had earlier become familiar but the successful Irish experience enable Faroe Seafood to develop sales throughout the UK and into many other markets.

Looking back on six decades of the food business, Mr. Catherall said it had been a pleasure to work for Bakkafrost, a great company that focussed on the all-important and sustainable aspects of the business, fish welfare and employees and customers.