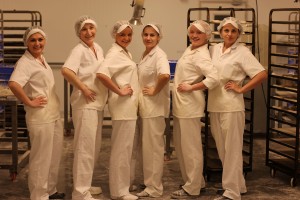 Margate’s Red Tractor-certified Speciality Breads is celebrating after being nominated as the Responsible Business Champion for both the North and South Thanet constituencies.

The company, which has seen YOY growth of 30% since the London Olympics and launched a new £3 million bakery last November has been nominated by MP’s Sir Roger Gale from North Thanet and Craig  MacKinlay from South Thanet due to the positive impact they have on the constituencies.

A Parliamentary judging panel then considers all MPs’ nominations against national criteria announced each year by the APCRG and selects one company as the overall APCRG National Responsible Business Champion. The overall winner will be announced at a reception in Parliament on 13 July 2016.

The judges and awards are specifically looking for companies which support the local community, invest in healthy workplaces, offer apprenticeships and training to all age groups plus promote equality and diversity in the workplace and monitor suppliers’ actions on these issues.

Established in 1996, Speciality Breads provides an ever-growing, premium selection of over 100 freshly-frozen breads, which are hand-sculpted by the company’s master bakers and distributed via wholesalers to pubs, cafes, restaurants and foodservice providers throughout the UK.

Flying the flag for Thanet, Kent and British manufacturing since it won the contract to supply its artisan breads to the Olympics in 2012, Speciality Breads has built a reputation for investing in people with 25 new jobs created in 2015 alone including apprenticeships.

The company started to pay the National Living Wage to ALL of its employees from October last year – 6 months before the Government deadline of April and training and skill development is at the centre of the company’s philosophy.

Speciality Breads has been BRC accredited for 12 years and has just been awarded the highest level (A+) of grade which is a huge achievement for a company of its size. The BRC scheme requires evidence of supplier monitoring, traceability, training and better work practises.

The company is also sponsor of the charity run – Broadstairs Folk Week taking place from the 6th -12th August which supports the South Thanet community while contributing in excess of £2 million to the local economy.

“It’s a huge privilege to have been nominated by both Sir Roger Gale and Craig MacKinlay and to get some recognition for the positive impact we have on the local area and community.  We’re extremely proud of our Kentish roots, our business, suppliers and most of all our brilliant people who have made success possible.”