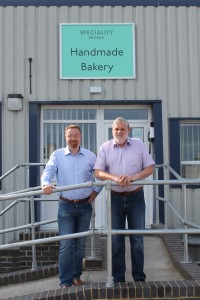 Red Tractor-certified Speciality Breads have appointed Simon Cannell as the new Managing Director after Peter Millen announced he would be retiring later this year.

Cannell is due to take up the position on the 5th September following four years at leading fresh produce business Chingford Fruit Ltd, where he held the roles of Sales & Marketing Director and Trade Marketing Director.

Prior to this Cannell spent seven highly successful years at Brakes as Head of Bakery where he was responsible for creating and launching the ‘La Boulangerie’ brand within the business.

“We’re delighted to welcome Simon to the company as he has an incredible skill-set and a proven track record in the bakery and foodservice sectors.  With the new bakery, an ever-growing premium portfolio and an incredibly skilled and hard-working team, Peter has left the company in an amazing place so we are confident Simon’s experience, expertise and ideas will only help us improve and grow further.”

Peter Millen, who became MD in 2012, has been instrumental in turning the company into one of the leading premium bakery brands in foodservice.  Under his leadership, company turnover has increased three fold and the company’s bread also played a starring role in the 2012 Olympics helping to fuel the athletes and competitors in the Olympic village.

Previous to his time at Speciality Breads, Millen was Commercial Director at Pritchitt Foods and also spent time as National Account Manager at Dalepak Foods Plc.  He will be remaining on at Speciality Breads until Christmas to ensure a smooth handover and transition.

“We’d like to thank Peter for all his dedication, energy and hard work over the last 13 years.  Under his stewardship, the company has grown in every way and not just sales.  He has been vital in giving the company stability, a strong team and has built the foundations for future success so we can’t thank him enough and wish him all the best in his retirement.”

Speciality Breads has had a busy 2016 to date with a raft of new products being launched including a Sesame Seed-Topped sliced Brioche roll, a Sourdough & Onion roll and the recent Malted Ciapanini roll made with Kentish Oils’ finest cold-pressed rapeseed oil.