Staff celebrate more than a total of 150 years of service 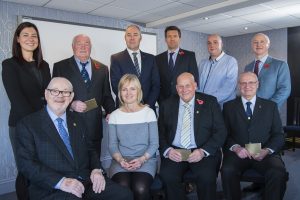 Reed Boardall, the Yorkshire-based cold food storage and distribution business, is celebrating the long service of five employees who are each marking at least 30 years of working for the business.

Denzil Cooke explains why he has remained loyal to the company for so long: “Even after 30 years here, every day poses fresh challenges.  It’s a great business which has been built over many years with input from the team and there’s a real feeling that we are all contributing to its continued success.

“I’ve seen a lot of changes over the years with software development having a huge impact on the industry as well as the sophistication of new vehicle design and, of course, a massive growth in the number of rules and regulations.  I’ve been involved in some fantastic building projects as we’ve expanded our Boroughbridge site and I’ve been fortunate to work with some really nice people.”

Jane Nelson adds: “Reed Boardall is a very friendly company and a great place to work with lots of investment and growth of the business over the years further improving the working environment.  The management has always been extremely flexible and caring and I couldn`t imagine working anywhere else.”

With a turnover in excess of £60m, Reed Boardall has grown into one of the leading names in the British food logistics sector, serving retailers and food manufacturers throughout the UK.  With a 780-strong team, it is one of the biggest employers in the area and has built up a loyal workforce. The team includes 175 employees who have been with Reed Boardall for over a decade as well as 27 staff who have completed 20 years of service.

Andrew Baldwin, managing director of Reed Boardall’s cold storage division, commented: “Our loyal workforce plays a key role in our continued success, helping us to consistently provide high levels of service to our customers. We believe that it’s our people who set us apart, we’re proud to be a family business which values every member of our team.”

Reed Boardall is one of the largest temperature controlled food distribution businesses in the UK, storing and delivering frozen food from manufacturers across Britain, Europe and further afield to all the UK’s best-known supermarkets.  Operating 24/7, its 180-strong fleet of vehicles moves up to 12,000 pallets a day and it stores around £100m worth of products on behalf of its customers.  It is based at a single site in Boroughbridge, Yorkshire, which is the largest of its kind in Europe.